Posted on October 29, 2007 by TheElegantologist 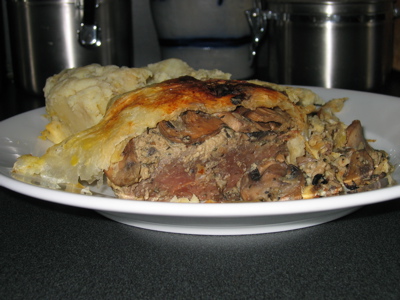 The divine Mrs. E. made a wonderful suggestion for our dinner party this weekend. “Beef Wellington,” she said. “We have that bit of paté de foie gras mousse truffée to use up.”

I couldn’t wait for Saturday night. And on the appointed day, she looked at the clock and asked when I was going to get started making dinner… Me? Beef Wellington was her idea… and I didn’t have a recipe. Apparently I’d done one for a Christmas Dinner one year, so there was precedent.

How hard could it be? I did manage to find a recipe in The New Basics Cookbook for individual Beefs Wellington (?) that used potted mushrooms. Alright, I’d adapt it… I’d win the battle.

First of all, I had a whole tenderloin of roughly 2 lbs. And I didn’t have puff pastry, but I did have frozen Phyllo dough (I am half Greek…) The mushrooms called for scallions, which I did have, and leeks which I did not… . And then there was the question of the “paté dfgmt.”

The results are visible above and the reviews were good… a bottle of wine per person might have influenced the verdict. The only difficulty I had was the cooking time. 15 minutes of finishing wasn’t nearly enough in the end. So we did as they do in Windsor Castle when the Queen likes her Wellington done a bit more than medium-rare. The basically raw feast went into the microwave for 4 minutes. Voila! Medium rare’ish.

Beef Wellington (serves four with a salad and mashed potatoes.)

1 Beef tenderloin of about 2 lbs.
1/4 of a package of Phyllo Dough, thawed
Butter (maybe a 1/4 of a stick) melted.
Paté de foie gras mousse truffée — about the size of a deck of cards.
1 package of sliced mushrooms.
2 scallions, minced.
Thyme
Sea salt and pepper
Dijon mustard

Rub sea salt, pepper and two teaspoons of thyme into the meat. Sear the tenderloin on all sides in a skillet of melted butter. Set aside to cool to room temperature.

In the skillet, melt some more butter and add the minced scallions. Cook, stirring until they are translucent. Add about two teaspoons of thyme, salt and pepper. Add the mushrooms and cook until the liquid from them evaporates.

Unroll your phyllo dough and drape a few layers (maybe 8?) across your baking sheet. Place the cooled tenderloin onto the middle of it. Brush the top with dijon mustard and smear it with the “paté dfgmt.” Pour on the mushroom mixture. Drape some more phyllo dough over the top and brush with melted butter while forming the whole thing into a package. (To be fair, Mrs. E. did this step as I can’t stand working with phyllo.)

Cook for longer than 15 minutes, I’d guess 20-25. If the phyllo starts to burn, cover it with some tin foil and continue to cook. Or stick with the 15 minutes and then nuke the result on high in the microwave for four minutes.

Serve with mashed potatoes, salad and a good red … we drank a Malbec.

If anyone gets more specific with the cooking times, please leave a note. I’d appreciate it (and I might have enough wine left to drink with the leftovers the next day….)

This entry was posted in Entertaining and tagged dining, dinner parties, Entertaining, recipes. Bookmark the permalink.