A Drink With Something In It

Posted on September 22, 2007 by TheElegantologist 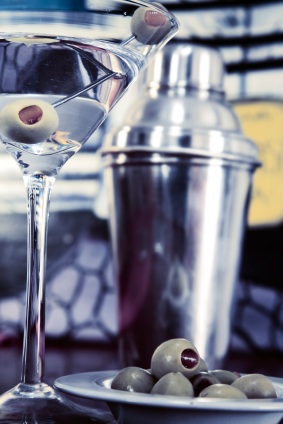 “A Drink With Something In It”

1. Just because it comes in a cocktail glass doesn’t make it a martini.

2. If it’s made with vodka, it’s a vodka-tini. There’s a reason that James Bond orders a “Vodka Martini.” If he’d have ordered a martini, it would have been made with gin.

Volumes have been written about the martini. And for good reason. I once mixed one for a Frenchman who asked me to make him a classic American cocktail. He about doubled over after the first sip. “You drink this!!!!??” he asked, incredulosly. “And that’s the reason we won the War,” I answered with an appreciative smack of the lips after my first sip. As Mr. Nash wrote in the poem above, “there’s something about a martini.” Learn to appreciate, make and serve an ice-cold “see-through” and you join a long line of elegant men and women.

It’s not a complicated recipe, but for some reason, it’s an easy one to get wrong. Some add more vermouth, some add less. There was a 50’s fad that had everyone barely misting the glass with vermouth; if they did more than just bow in the direction of France. But that’s about it for standard variations.

That’s the recipe. It works out to about a teaspoon of vermouth to a shot glass of gin. The classic drink is served straight up, in a triangular cocktail glass like the one pictured above. A green olive with the pit (or Spanish Colossal Olive with a Pimento Stuffing) or a lemon peel is the garnish. The Gibson is made using a cocktail onion.

And please serve them straight up in the classic glass. The juxtaposition of the triangle of glass, roundness of olive (or spiral of the twist) and straight line of the cocktail pick is…. well, it becomes art. That’s probably the reason that Hollywood loves a martini. The camera loves one.

Which brings up another point. Martinis are made with booze and wine. That’s it. Shaking or stirring mixes into the potion the tiny bit of water necessary for the drink to really come into its own. (All cocktails need a very little bit of water in my opinion.) But martinis, as my French friend learned firsthand, are potent. Handle with care. As Dorothy Parker wrote:

“I like to have a martini.
But only one at the most.
After two, I’m under the table.
After three, I’m under my host.”

2 Responses to A Drink With Something In It