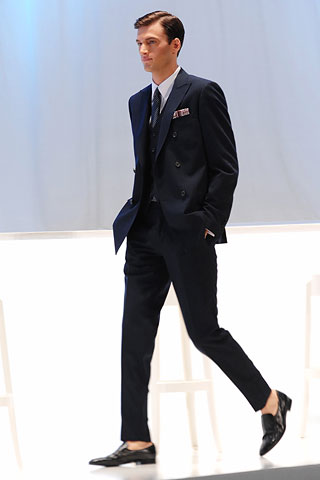 “Those characters always wore dark-blue suits.”
— Cary Grant on Aristotle Onassis and Lew Wasserstein. Quoted in a GQ profile from 1986.*

I write a lot about being appropriately dressed. But it occurs to me that I’ve never really defined what I consider to be “appropriate.” So I thought that I would begin a series of articles about wardrobe basics for men. (I have my ideas about women’s clothing, but I haven’t really done the research yet.) I’ll begin with the blue suit.

Think elegance and chances are you’ll wind up at Cary Grant. If you’re like me, you always picture him in black tie or in that indestructable grey suit from North By Northwest. But as the above quote shows, Mr. Grant was always sartorially savvy — looking to see what looked good on whom. And later pictures show him classically suited in dark-blue. Ian Fleming’s James Bond, like the author, preferred blue suits. In The Man With the Golden Gun, Bond’s “dark-blue, single-breasted suit, white shirt, thin black knitted silk tie, black casuals [we’d say ‘loafers’]” are referred to as his “usual rig.” You could do worse than to follow either lead when the situation calls for subtle, yet, commandingly elegant attire.

The rules are relatively simple when it comes to color — dress to bring attention to your face. Me? I’m dark-haired, dark-eyed and distressingly white according to the more golden-toned Mrs. E. who hails from South America. A dark suit and light shirt frame my face, for better or for worse.

A well-cut and impeccably tailored dark-blue suit will be appropriate in almost any situation. Depending on your level of confidence, it can even hold its own at a black tie optional party. Especially a solid midnight-blue, double-breasted (6 buttons 2, please) worn with a white, French cuff, spread collar shirt, silver-y tie, and startched white linen pocket square.

Two-button, three-button, three-piece, single or double-breasted, it’s up to you. The blue suit is about as versatile as it gets. Start with a solid blue that goes from the office to an evening out and diversify into stripes, birdseye or nailhead later. You’ll be ready for a wedding, funeral, diplomatic reception or car chase.

*I have this issue, but it’s been misplaced. I ran across the reference in Richard Torregrossa’s excellent book

Cary Grant: a Celebration of Style

Sorry about the picture, please ignore the silly styling and button your DBs. It’s hard to find a good photo of a great blue suit. I suppose they’re considered too plain for most designers. 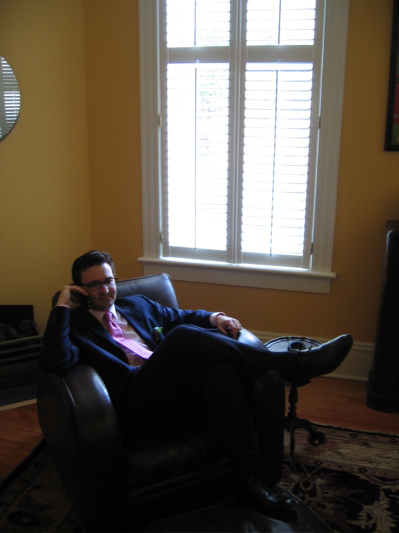