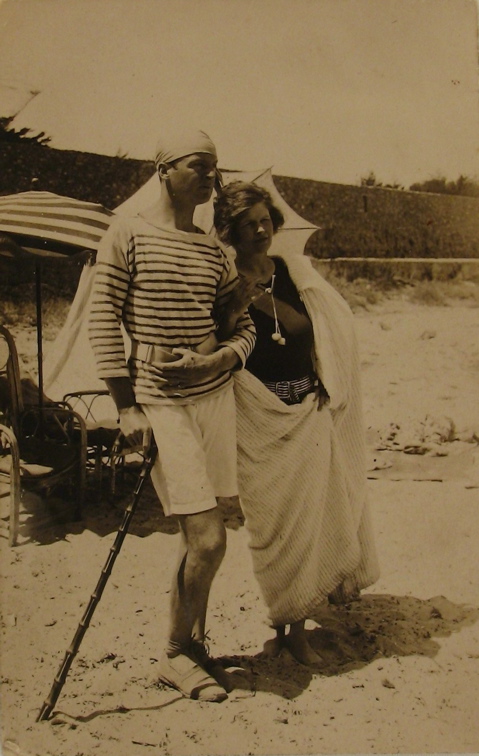 I should have entitled this post “Living Well is the Best Revenge” but I’ve already used that… It is the title of a book by Calvin Tomkins about Sara and Gerald Murphy. If you haven’t met the Murphys yet, I can’t recommend highly enough Amanda Vaill’s wonderful book

Everybody Was So Young

The Murphys were often thought of as wealthy patrons of the arts and counted among their friends Picasso, Dos Passos, Hemingway, Cole Porter and the Fitzgeralds. Their life inspired numerous works of art by those lucky few who ran in that circle between the wars. The Murphys are also widely credited for popularizing (for better or worse) the French Riviera as a summer resort destination.

While we were living in St. Raphael, the Inimitable Mrs. E and I picnic’ed on the same beach (La Garoupe) where Gerald Murphy first cleared seaweed and rolled out the Oriental rugs and umbrellas to enjoy the sun. In the front of my journal I pasted a color reproduction clipped from The Washington Post of Gerald Murphy’s painting “Cocktail.” I had no idea of the enduring legacy that they had left behind them, nor of the impact that their story would have on me.

A new exhibit dedicated to the Murphys and their influence (the first of its kind, I believe) is being unveiled at Williams College, July 8 – November 11. It will also travel to Yale University and to Dallas Museum of Art. If you can get to any of the shows, do.

As you will see, the Murphys cultivated the art of living well, refining their aesthetic with doses of modernism, French and American culture while they and their circle of friends helped to birth the modern movement. If there are role models to follow in our examination of an everyday elegance, I think it is safe to say that they are the tops (as Mr. Cole Porter wrote.)

I can’t do their story justice. In my mind, they glow. The life that the Murphys built for themselves, despite a number of tragic events, continues to inspire me. I hope it does you, too.

2 thoughts on “Moods for Moderns”