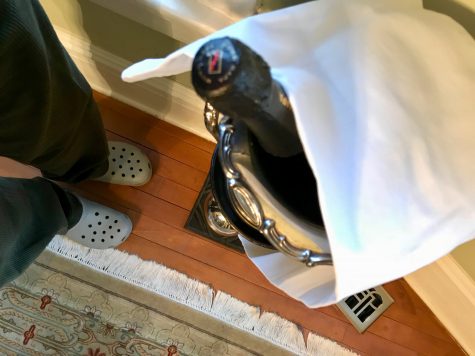 2017 left me in a bit of a pickle. I wound up at the podiatrist for a broken toe and when that was all healed, but I still had pain, he was kind enough to let me  know that the x-rays revealed a flattened bone that was offset in the bottom of my foot and a torn ligament.

“Well, it’s killing me. I can’t walk the dogs, stairs are awful, even driving is uncomfortable,” I replied. “What can I do?”

“Wear good lace up walking shoes, sneakers, or Crocs,” he prescribed, with a completely straight face.

“Crocs are great, I wear them at home and try not to wear them out of the house too much…”

We looked at my brown suede tassel loafers. He shrugged. I considered amputation.

A couple of days later, I washed down two Advil with some port and ordered the cheapest pair I could find at Amazon. They are light grey, which is apparently less appealing than any other color of the god-awful things.

But, here’s the rub, my feet don’t hurt as much. I use hiking boots and derby boots with Danite soles to walk the dogs, and loafers as much as I can stand. But unless the arctic cold returns (when I will return to shearling lined slippers) I’m stuck with Crocs.

What is a poor elegantologist to do?

I need something with some structure that feels like a pair of Crocs and looks like a pair designed by Crockett & Jones. Worse still, after having to put on a new roof (even in faux-slate!) a new pair of Belgians is out of the question. Besides, have you seen what Mr. Casuals cost these days? For that price, I could purchase half a pair of the G&G Urban Commando Boot, which has to be the most incredibly designed brogue boot ever seen.

I doubt I could run a very successful crowdfunding appeal for luxury footwear. It does seem a bit crass. Certainly a first world problem, if nothing else.

So, I’ll turn to crowdsourcing.

Any thoughts? Something that can go with trousers and sports coats, at least? Is there some sort of orthotic Prince Albert slipper or house shoe?

Or do I continue to keep the lights down low and the drapes drawn at home?

5 thoughts on “Croc-etts? Is there such a thing?”