Posted on September 16, 2014 by TheElegantologist

I had something else to ramble about today, but I’ve been on a bit of an organizing kick. I couldn’t stand my car any longer and took it for the Super Clean Interior, Wash ‘n Wax treatment at CarPool. That happens about once a quarter in good years. The crew today at the Libbie Place station was particularly attentive (yup, clean cup holders AND shifting sleeve thingy…) It was wonderful to slip inside, shift into first and head out into the sunrise.

And then I noticed the door pockets were stuffed with mints, maps, sunglasses case, cords, cables, CD’s, and something kinda melty at the bottom. Ugh.

I decided to do something about that as soon as I got home. So I got a bag, filled it up with the detritus, sorted it, threw away the melty thing, realized I could live with selecting a CD for a week’s listening, and could get by with one package of mints. I was pleased with my decluttering. The necessaries would go into the glove box and I would feel all James Bond again.

Until I opened the glove box. The manual for the car took up much of the space. Along with every inspection report, insurance policy update, and papers from each repair, I carry a flashlight, notepad, pen, Swiss Army Knife, hand sanitizer, and some tissues. All that went into the bag, too. The bag now came inside to be dumped on the desk and reorganized. I got rid of a lot of stuff by filing it in the appropriate place, but there were still a lot of loose things to corral.

Off to Amazon, where I searched for organizers, hardshell cases, etc. . Wow! There are all kinds of cool and expensive things. I was really drawn to the Moleskine Medium Black Shell, but wasn’t sure about dimensions.

Amazon Basics Universal Travel Case for Small Electronics and Accessories was also on target. But would it fit?

In the end I realized I had an extra Grid-It Organizer,

which handled most everything, including some antiseptic, waterproof bandages, Benadryl, and quik-clot! 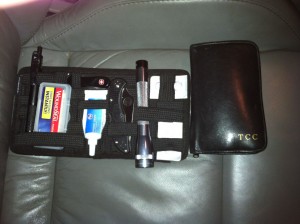 The extra cords, earbuds, and the like went into an old travel grooming kit.

I still need to cut down on a few things, and might order that multipurpose pouch, but I’m pleased with the start I’ve made. It feels good to declutter and organize and the car looks even better for it. (I even tried defogging my headlights… maybe a few more applications…)

Besides, I did get rid of the melty thing.

2 Responses to The Glove Box