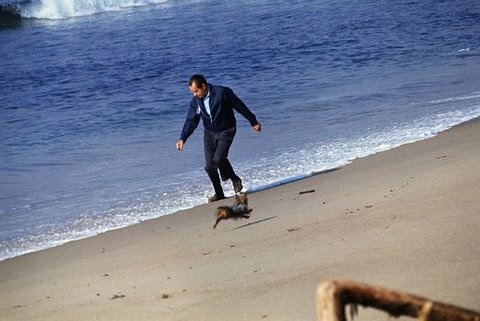 (The modern businessman’s summer dress as modeled on the beach by Pres. Nixon.)

I’ve written before about the miracle fabric that is seersucker. I’m thinking more about it today, even though it is cold and rainy. Just yesterday it almost unbearably hot. These transitional days make it hard to dress. So, during my daily wardrobe rumination my thoughts wandered to the Richmond I first encountered in the 1980’s.

Back then, it wasn’t at all unusual to see businessmen dressed in khaki poplin, seersucker and pincord suits. The trousers were all flat front and hemmed just a bit too short. The jackets were all three button, rolled to the second button and cut like sack suits. Shirts were buttondowns, usually white. Ties were striped with the occasional whimsical Hermès. White bucks weren’t uncommon, but penny loafers were the more usual fare. There were even straw hats to be seen. I used to chuckle at the very 1960’s-ish-ness of it all.

Yes, I would stand there in my double-pleated, full-cut, super 120’s hi-twist suit with the slightly extended shoulder and drape cut, striped shirt and woven patterned tie and chuckle, the very picture of late 80’s Italian style, at the passing businessmen. Guess who has the last laugh now? Those men who wear the same clothes that they’ve worn for thirty years. I still see them on Sundays walking into church. They look great. My 80’s suits languish tucked into the back of my closet for a good reason.

I’d like one of those seersucker, pincord or poplin suits today. The 100%, lightweight cotton ones. Even better, I’d like to see us American men adopt them again. At least for Fridays, when a slightly more wrinkled appearance might be acceptable. They remain surprisingly suspicious in the eyes of the modern air-conditioned acclimated businessman. Damon Runyon’s words quoted above don’t seem to ring true today. Pincord and seersucker all smack of Southern costume, although poplin and linen looked poised to make a comeback, if GQ and J. Crew are to be believed.

What about you? What special seasonal suits will you break out this year? Or do you only wear three season fabrics?