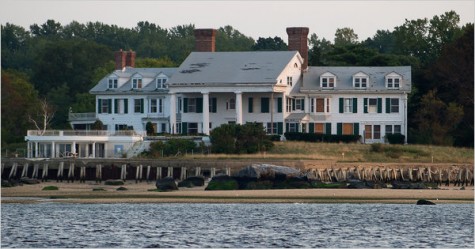 (Above, the Lands End estate. NYTCREDIT: Joshua Bright for The New York Times)

“There was croquet on the 13 acres of lawn, illumined by car headlights and parties at all hours for what Swope’s wife, Margaret, described as “an absolutely seething bordello of interesting people.” They included Bernard Baruch, George Gershwin, Robert Moses, the Marx Brothers, Irving Berlin, Vanderbilts, Whitneys and Harrimans. It’s the world F. Scott Fitzgerald captured in “The Great Gatsby,”which still seems fresh and urgent almost — remarkably — a century later.

from an article in The New York Times

Lands End is set to be demolished. While the party described above took place in “East Egg” (Kings Point), the house stands (for the moment) in “West Egg” (Sands Point, if I understand this all correctly.) Gatsby, like Fitzgerald, stood looking across the water for something that had eluded him. The developers see the value in the land. Something has eluded them, too.

10 thoughts on “Beating Against the Current: Lands End, Gatsby’s Mansion, Is Set To Be Demolished”