Posted on September 17, 2010 by TheElegantologist

[Ed: We have a real treat today just in time for the weekend’s tipple. Easy and Elegant Life’s very own single malt connoisseur and consultant — my esteemed father-in-law — has reviewed a copy of Whiskypedia by Charles MacLean that was sent to me by the publishers. I’ve glanced through and enjoyed it very much for what it is. And what it is, is precisely what you will learn below. Questions? Comments? Thoughts on the book or single malts in general? Be sure to leave a comment and I will forward them for you!] 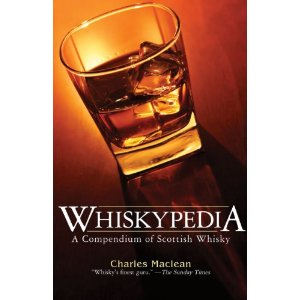 Charles MacLean’s Whiskypedia is true to its title.  He describes 137 distilleries of Scottish malt and grain whisky, including:  their histories, their operation, and their whisky.  Interestingly, three of them distill both types of whisky, and so have both pot and column stills.   The list of distilleries is based on those currently operating, those that are starting up, and those that operated in the last half of the 20th century, but are now mothballed or have been dismantled.  33 distilleries fall into the former category, but the make of a surprising number of those is still available.

While the inclusion of Grain Whisky distilleries makes for interesting reading, I suspect that most readers will focus on the 98 distilleries currently making Malt Whisky.  The lure of single malt scotch comes in large part from its enormous variety—a variety that comes not only the large number of individual distilleries, but from the multiple expressions that they usually offer.   These differ not just in age, but in production, e.g. amount of peat, and in maturation, particularly the types of casks used to age the expression.  Thus while blended scotch drinkers tend to have a favorite, serious single malt drinkers are more to have a list of preferred whiskies.

Before discussing the distilleries, MacLean lays the ground work.  He starts with a brief history of scotch’s ups and downs, continuing even now that it has risen from a local, rustic product to a major player in the world spirits market.  Next he gently debunks the importance of regional differences.  He ends with a very clear and succinct overview of how malt whisky is produced and matured, which is crucial to the distillery entries.

The heart of book is the Gazetteer of Distilleries.  The entry for each distillery starts with a brief factoid on the left side of the page giving its location and contact information, or the year of its closing.  This is followed by “Historical Notes”; “Curiosities,” additional historical observations; “Expressions” offered; “Raw Materials” used in production; “Plant”; “Maturation” or type of casks used; “Style” of the new spirit; and “Mature Character,”  which focus on the 12 year old expression.  The Gazetteer is followed by seven small sections, dealing with such topics as distillery ownership, world consumption, independent bottlers and MacLean himself.

All in all, this is a very complete book on distilleries; indeed the only thing missing is a map.  The “Historical Notes” and “Curiosities” are engrossing and reflect MacLean’s background as a historian.  The descriptions of the tastes are straightforward, uncomplicated and easy to grasp.  And those who like to speculate on the relationship between production and maturation of whisky, and its taste, will have the basic facts at their fingertips.  To sum up, this is an excellent book and is well worth its modest price ($17.95).

5 Responses to “Whiskypedia” by Charles MacLean