Posted on April 20, 2010 by TheElegantologist

Welcome back to the House of Ick. Everyone is down with something. Mrs. E. is fighting bronchitis, the kids had fevers and racking coughs, allergies have run us through six plus boxes of tissue in less than a week and I haven’t been able to go twenty minutes without hacking up a lung for the past two weeks. Despite that I threw myself back into the fight and managed a couple of miles, a few hundred flutter kicks, a hundred situps and an equal number of push-ups. Let’s hear it for the albuterol inhaler.

All of which means that I’ve been neglecting spring. The house is a wreck and I am unmotivated to do too much. Including cook.

Which is why I was very pleased when my birthday came early this year and I was presented with a Vita-Mix 5200 “Whole Food Machine”. 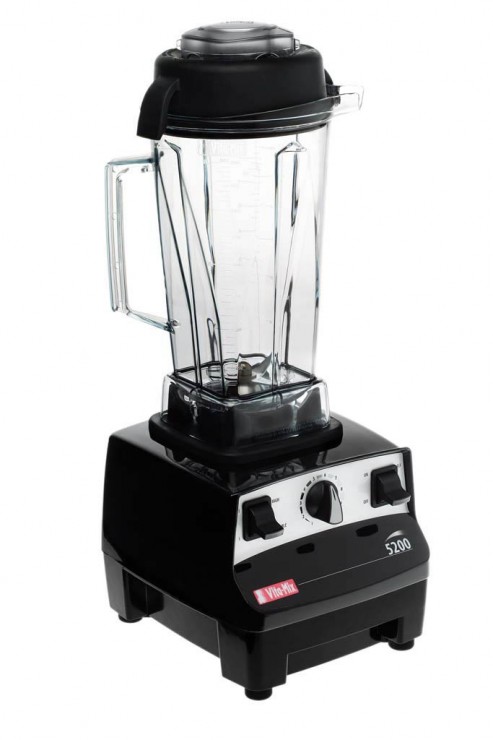 I’ve written before about my blender and the Easy and Elegant Life Breakfast Smoothie, and I have had few complaints with the glass and chrome beast that sits under my counter cabinets. It gets a daily workout and handles most everything well, ice and peanut butter not withstanding.

The Architect was the first to twig me to the Vita-Mix. He called it “the millionaire’s blender” and mentioned, after he was finished deafening us whilst showing off the incredible speed of the thing, that he could do away with every other appliance in the kitchen, except his Vita-mix. Then he told me the price, and discreetly mentioned that it could be found at Costco for less. (Sort of true.)

The Vita-mix is a variable speed monster. Thanks to that variable speed feature, I can chop/mince very easily, which is good since my twenty-five year old Cuisinart food processor has to be operated with a cheese knife activating the safety release. The speed thing allows me to pulverize the large food stuffs loaded into the bottom of the jar thingy before I wind it up and let it blend the rest of the load on high. I can also make and heat soup (?!) and serve homemade ice cream for dessert.

There are a couple of drawbacks. It’s a big thing. Tall. Too tall for my cabinetry, which means it sort of hangs out on the counter. Get one before you remodel. I will also have to by a separate jar thingy for making my own dough and dealing with other dry ingredients. Until I got the machine, I didn’t have an interest in making bread. Now I do. The final “complaint” is that it sounds like a jet engine when it gets going. It should come with an “11” on the speed dial. But it never goes for more than a minute or two anyway.

On balance it’s a beautiful piece of equipment. Expensive, but if used a couple of times a day, everyday…. It’s also very good when all you really want to do is go to bed. In the event I don’t rally in the next few hours, I should be able to put some sort of dinner on the table with relative ease. I predict a lot of sorbet for summer dinner parties and hearty soups for the winter.

This entry was posted in Entertaining, Living, Uncategorized and tagged Vitamix 5200. Bookmark the permalink.

3 Responses to The Millionaire’s Blender