There I was reading a post by the delightful Mrs. B. about the influencers of modern design and I had to weigh in with a comment as my tailor and I were speaking of the changing landscape of menswear just the other day. Menswear, you see, changes in glacially influenced increments. An eight of an inch here or there; perhaps a half-inch in the global warming scenario.

Outside of the fashionable trend to wearing workwear and “heritage” brands, two designers, in my opinion, have shaken things up over the last few years.

This guy, for whom dressing is performance art:

(No attribution, sorry. Found it here.)

And this guy, who sexed it up again (seriously,  have you seen his perfume ads? Sex sells.) 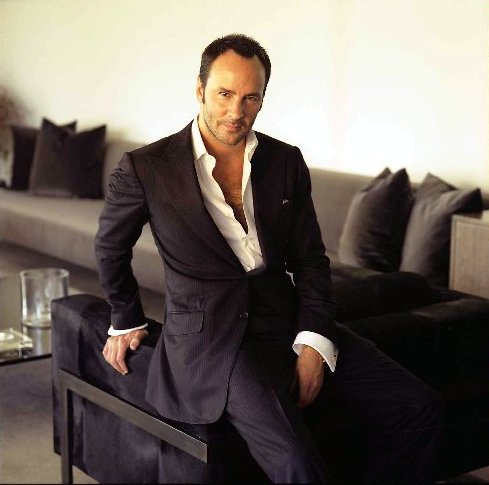 They are, respectively, a caricature of the early 60’s and an updating/toning down of the 70’s. I find this a bit of a shame, because the “average” guy is going to be convinced that he needs to wear something he shouldn’t necessarily wear.

Le me go on record as stating that traditional clothing will never go out of style, whether it’s Savile Row or Brooks Brothers based. Pleats, gentlemen, are nothing of which to be wary. Pleats do not look sloppy. Trousers that have not been fitted to you or are not being worn correctly look sloppy. A fuller cut “blade” suit isn’t baggy if it has been tailored to you, it is simply a different look. Witness Michael Douglas in Alan Flusser in “Wall Street” or Redford’s Gatsby in Ralph Lauren. The problem is that these traditional looks were coöpted by designers and, like the Zoot Suit, taken to extremes. Football player padded shoulders, triple pleats, sack suits with no shape whatsoever, and unstructured garments incorrectly cut to suit everyman (Armani suits rely on the rigourous cut to keep their shape as they are unstructured) added to the general distaste for dressing up.

Today’s designers seem to think that everyman is very thin and fit. I hope that’s more the case, but I’m not sure it is. I say improve upon what nature has granted you by carefully selecting your clothing and having a good realtionship with your tailor — bespoke or alterations. It is the difference between looking good and just being good looking. Be comfortable in your own skin and have your clothing comfortably fitted to follow the lines of your body instead of fitting you like a second skin.

Unless, of course, you are as fit as Mr. Ford. In which case, flaunt it while you’ve got it and leave seam allowances of at least an inch in the event that you age less gracefully than anticipated.