Posted on January 18, 2010 by TheElegantologist 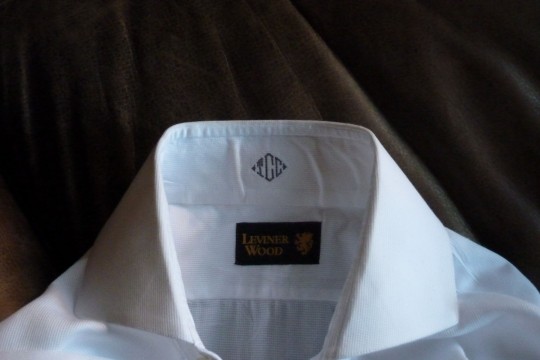 Richard wrote me recently to ask:
Could you please go into detail about the monogram etiquette for men’s shirts – front pocket, exact placement of (top of pocket, bottom of sleeve), cuff monogram, traditional color (black, blue, gray), order of letters, size of letters, etc.? Also, is there a certain style for a certain age – plain for older teen boys, more formal for men? I need every detail!

Well dear readers, there are two schools of thought on monogramming shirts. One is that you shouldn’t. The other splits into two camps, the seen and unseen.

But, you may wonder, what is the purpose of the monogram in the first place?

Very simply, the monogram identified the owner of the shirt when laundry was first sent out of the home. Since a man would no sooner appear in his shirtsleeves in public than he would in his underwear, the monogram wasn’t ever really on display. The mark may have been hidden on the tails of the shirt, or under the neck line of the suit’s vest.

After the vest fell out of favour, the monogram became more visible, especially if a man were to remove his coat in the office. Often the monogram would be placed on the shirt pocket (which became useful as a man missed the pockets on his nonexistent vest), either in the middle of the welt at the top or bang in the middle of the shirt pocket. Those of us whose dress shirts are made without chest pockets frequently choose the same location for a monogram. The European fashion is to monogram the left side of the shirt about four or five inches above the waist of your trouser and about the same distance over from the buttons. I like that arrangement better.

Then came the era of conspicuous consumption and the monogram, which implies that your shirt is custom made although any shirt may be embroidered, migrated to the shirt cuff or even the outside of the collar. In my opinion, this placement is equivalent to TYPING IN ALL CAPITALS IN YOUR EMAIL. It shouts, rather than discreetly announcing itself.

In terms of elegance, the smaller and less visible your monogram, the more elegant. Flusser recommends a monogram be no larger than 1/4″. If your initials are done by hand, they may be very small indeed, once again discreetly announcing that your monogram is hand-embroidered and therefore even more elegant than that done by machine. Those small imperfections speak volumes to the connoisseur.

Colour is largely up to you. Pick one echoing one of the colours in a fancy fabric, choose tone-on-tone or contrasting stitching as you see fit. The smaller the mark, the more you may want it to stand out. Or you may have a favourite colour that you use across all of your shirts. 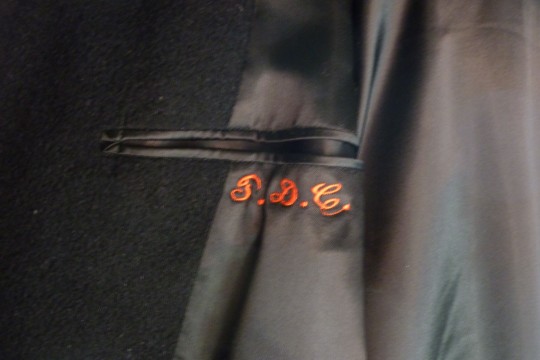 (My father’s initials embroidered inside his topcoat helps me identify it in a sea of black topcoats at parties.)

What we have come to call the font is also a personal preference. You may choose block or script, with or without a fancy layout, as you wish (or as the seamstress’/tailor’s skills allow in the case of hand-embroidery.) The usual order is first name, surname (which initial will be slightly larger), middle initial in fancy forms or first, middle, last if you choose a straight layout. 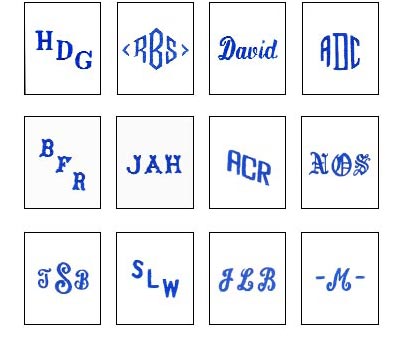 I like to have my shirts monogrammed inside the neck band in grey (see lead photo) on a white shirt or red for a fancy shirt. I know it’s there. The shirt tail would be a second choice for me or maybe on the gauntlet — the sleeve placket — in back of the button, just below my elbow. In “Dressing the Man: Mastering the Art of Permanent Fashion” by Alan Flusser, there is a marvelous photo of Fred Astaire in shirt sleeves, the left of which is monogrammed about mid-forearm. Eccentric, showy or “old money”, it’s sort of a fun idea. But then he wouldn’t be seen without his coat outside of the rehearsal space.

As far as age appropriateness goes, my three-and-a-half year old has his name sewn into his clothing. But it’s printed on little tags and identifies the clothing as his in the event he needs to be changed after a mud/paint/body fluid mishap. I imagine he’ll make it to high school before he wears monogrammed shirts. They’ll be my initials, as I’m sure he’ll be poaching from my wardrobe.

This entry was posted in Elegantology and tagged "Dressing the Man: Mastering the Art of Permanent Style", Alan Flusser, Fred Astaire, Monogramming shirts. Bookmark the permalink.

5 Responses to The Monogram Monograph