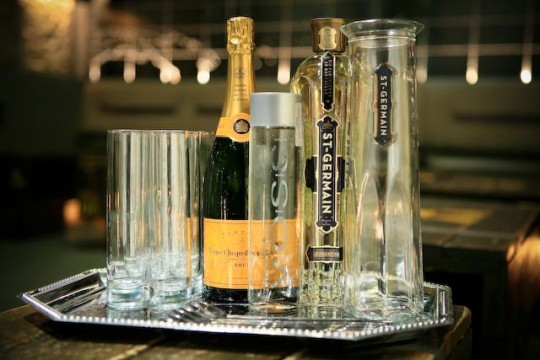 (Image of The Underground’s Table Kit via: Cheeky Chicago.)

Was it at Les Deux Magots or the Café de Flore that you overheard them? At any rate it was somewhere in the 6eme, and so it must have been Saint-Germain-des-Prés.

“Hell is other people,” he quoted back to her.

They were obviously drinking the wrong stuff.

It is a rare occasion on which I will mix anything into Champagne or sparkling wine. More often than not it is simply to salvage an inferior bottle. The most popular combination around the Manse has been the Kir Royale. Until last weekend when all assembled discovered the delights, thanks to an unusual hostess gift, of the St. Germain and Champagne cocktail.

Suffice to say that this concoction is a revelation. Subtle, delicious and, served as an aperitif, it didn’t lay waste to the crowd by the second glass as our normal offering of dry martinis, up with a twist, will.

I’m not sure how to describe the taste to you. The elderflower liquor is something different from the usual suspects. Not a thing like Chartreuse for example. The literature will tell you that there it has a “clean floral nose with hints of pear, peach and grapefruit zest.” All tastes which will exist within or enhance the flavour of Champagne. But it’s the “juice of a few flowers” that brings this stuff to life. Elderflowers bloom in spring and for something like three weeks only.

Obviously only a limited amount of the liqueur can be produced from such a small harvest. Which makes it just the thing for a rare Champagne cocktail. I encourage you to sip a little essence of spring this winter’s weekend. We will.

6 thoughts on “St. Germain, Germane to the Champagne Cocktail”