Posted on January 21, 2010 by TheElegantologist 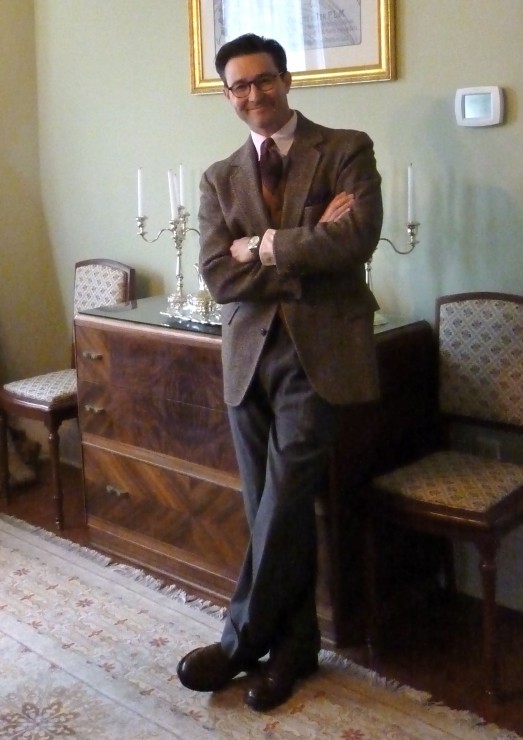 There was a time that I didn’t cotton to paisley. That was after high school and during those first “professional years” following college graduation. The years at my college may be best filed under “experimental” in terms of wardrobe, although there was always a dinner jacket hanging in the closet, just in case.

Up on the shelf in the library there is a book entitled “Paisley Goes with Nothing: A Man’s Guide to Style”

. It is billed as a witty and insightful book, written by an editor of InStyle magazine and a comedy writer.

I don’t remember much about it, truth be told. But the title sticks with you.

Especially if you disagree with it, as I do. Paisley goes beautifully with tweed and oxford cloth. It’s the pocket square that’s throwing me off today, but I may just live with it.

The design itself, that sort of crescent shaped teardrop bit, is of Indian and Persian design. The design, when first imported to Europe, got so popular in the 1700’s that it was outlawed in France to give the French fabrics a chance in the market. (Of course the restriction didn’t hold up and the popularity of paisley fabrics gave birth to the toile de Jouy industry.)

We know paisley as paisley thanks to the small Scottish town from which it takes its name. During the 19th Century, soldiers who had traipsed across the colonies brought home woven shawls from Kashmir, the East India Company imported more, and soon the Scottish locals got into the swing of things, weaving on their own jacquard looms. Not content with the results, they made some modifications to their looms and soon were able to work in five colours where most other producers had to be content with two. Paisley became the foremost producer of the good stuff and by 1850, they were weaving shawls in fifteen colours. Which was roughly a quarter of the colours being woven in Kashmir….

Soon enough you could by fabric that was printed with the popular pattern, the prices dropped and paisley suddenly went with everything.

Then came the bandana and the sixties and the seventies… Which is why I was surprised that I turned up the tie I’m wearing in the photo above. It was my father’s and it was made by Seprella of London, about whom I have no knowledge. Judging by the width, it must have been made in the fifties or sixties and would have been very fashion forward for a guy like my Dad. Unless he bought it to go with this ancient Pendelton tweed jacket, which has hints of pink and blue in the brown and cream herringbone. The paisley tie was popular on college campuses during the ’30’s as sort of a rakish alternative to the striped tie with tweed jacket and flannels looks.

Paisley can be traditional. Paisley can be fashionable. And sometimes it can lend a certain style. Particularly in an Ancient Madder, which, regrettably, this tie is not. Would you wear paisley today?

This entry was posted in Elegantology and tagged "Paisley Goes With Nothing", Ancient Madder, Kashmir, Paisley, The East India Company. Bookmark the permalink.