Posted on November 26, 2009 by TheElegantologist 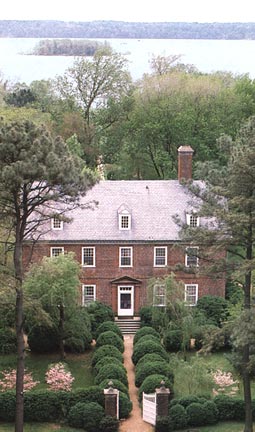 (Click on the photo to visit the website for the house and grounds on The James River.)

They Gave Thanks for Their Safe Arrival to the New World

The first Thanksgiving occurred when Captain John Woodlief led the newly-arrived English colonists to a grassy slope along the James River and instructed them to drop to their knees and pray in thanks for a safe arrival to the New World. It was December 4, 1619, and 38 men from Berkeley Parish in England vowed:

“Wee ordaine that the day of our ships arrivall at the place assigned for plantacon in the land of Virginia shall be yearly and perpetually keept holy as a day of Thanksgiving to Almighty God.”

You’ll find their vow carved on a brick gazebo marking the location believed to be where Woodlief knelt beside the James River.

Visit Berkeley Plantation and tour the grounds, gardens and three-story manor house built in 1776. See this birthplace of Benjamin Harrison, a signer of the Declaration of Independence, and of his son, the ninth U.S. President William Henry Harrison. Harrison’s grandson, another Benjamin Harrison, became the 23rd U.S. president.

Berkeley stakes claim as the site of the first distillation of bourbon whiskey, produced by missionary George Thorpe, who declared it “much better than British ale.”

It was at Berkeley that Union General Daniel A. Butterfield composed “Taps,” which was customarily used as a “lights out” bugle call for soldiers camped on the grounds.

The Georgian mansion is believed to be the oldest three-story brick house in Virginia that can prove its date. It is decorated with 18th-century antiques.

Berkeley became a focal point of economic, cultural and social life in colonial Virginia. It has been host to more than 10 presidents, including George Washington.