A Coat for Veteran’s Day

Posted on November 11, 2009 by TheElegantologist 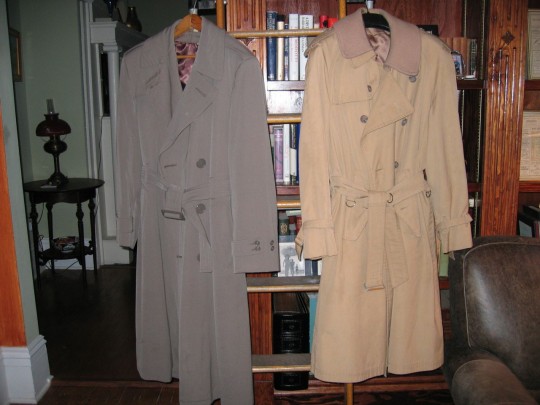 The wool coat at the left of the photo above is the one that went with my father’s “pinks and greens.” It weighs about fifteen pounds. I imagine he wore it after he was commissioned and sent to Germany for his first post in Garmisch. He used to tell about having to walk ahead of a car in a snow storm to make sure that his buddy didn’t drive off a mountain. They had been skiing and were in danger of being late for parade or something. The coat may have accompanied him to Korea soon after. I can’t imagine he’d of needed it whilst at LSU. Even with the lining taken out, it’s warm. 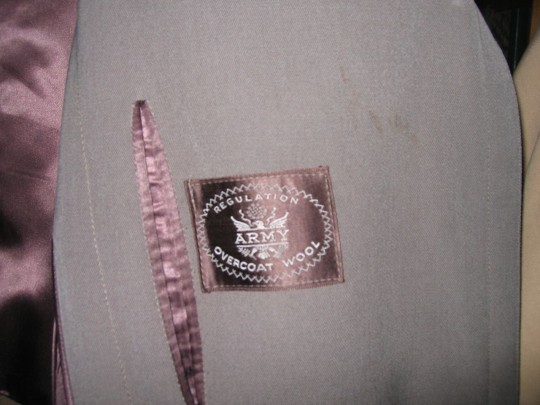 I wore this coat through college, when it got me across campus in all sorts of foul weather. It also took me through lots of bars. The epaulettes were useful for tucking my black beret and gloves under. The high collar supplied a certain anonymity. Not that I wasn’t getting looks in a coat like this. 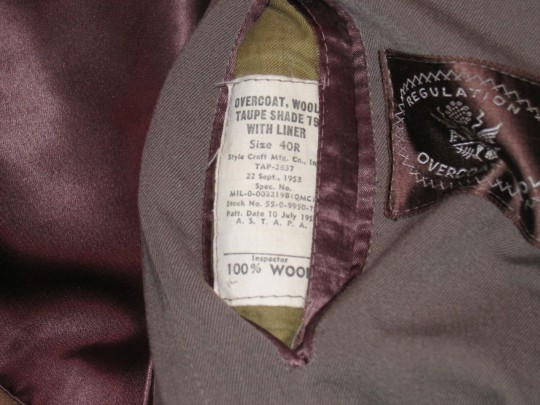 It’s missing the throat latch. The last I remember seeing it was the night we drove to Hampton (?) to a bar in a waterfront mall that served Guinness on draught. Somewhere there’s a photo of me on the beach, completely buttoned up. I’m the only one who didn’t look like he was freezing. 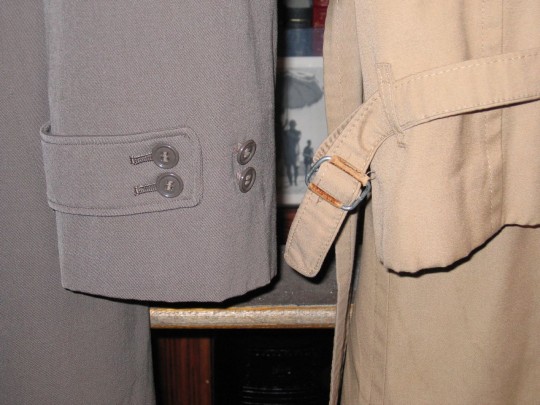 Burberry patented gabardine in the mid to late 1800’s and held the rights to the tightly woven, wind and water resistent fabric until 1917. They first made a raincoat in wool gabardine for those who served in the Boer War. It wasn’t long until that raincoat came to the attention of The War Ministry and some half a million coats were issued to the men who fought WWI. The trench coat was born. 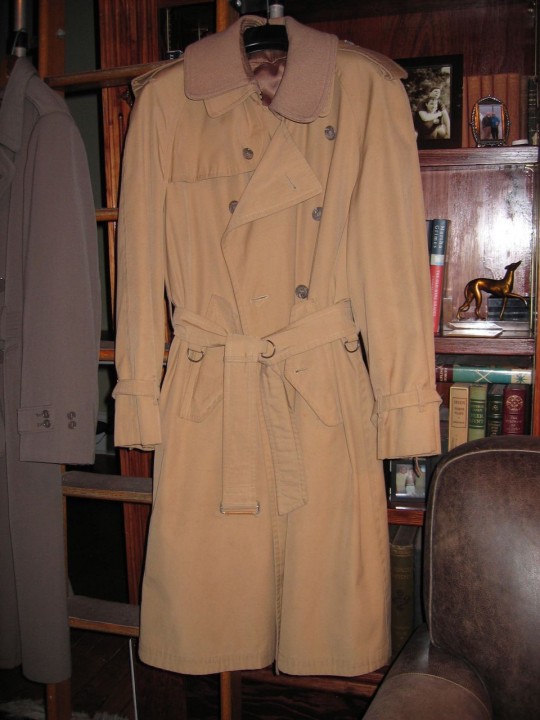 Form follows function in the classic trench coat. Epaulettes held Sam Browne belts and shoulder straps in place as well as displaying rank. The D-rings on the belt were for slinging extra pouches, maybe grenades — but I wouldn’t want to take the chance on dislodging a pin by accident. The storm latch closed the throat up to protect the wearer during extreme weather. Cinches at the wrist tightened for the same reason. The storm flap at the right shoulder added a measure of waterproofing as did the the short rain cape across the shoulders. The coat is a bit shorter to allow for freedom of movement whislt going over the top, or riding whatever is at hand.

This one was my father’s trench coat as interpreted in cotton for Britches of Georgetowne. He wore it for most of the 1980’s, until he died in ’87. It was his daily commuter coat when he retired and returned to work for DOD at the Pentagon. This version retains a lot of the original design, right down to the d-rings, which were never pressed into service. It was also considered stylish to tie the belt rather than thread the strap through the buckle. 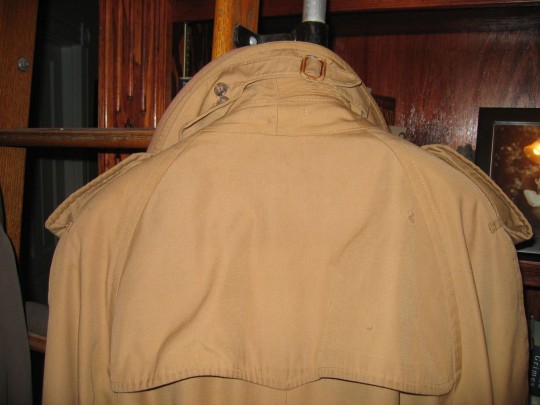 I could never determine whether or not the lining is Burberry’s produced under license. It is mostly hidden under the wool and acetate button-in lining. 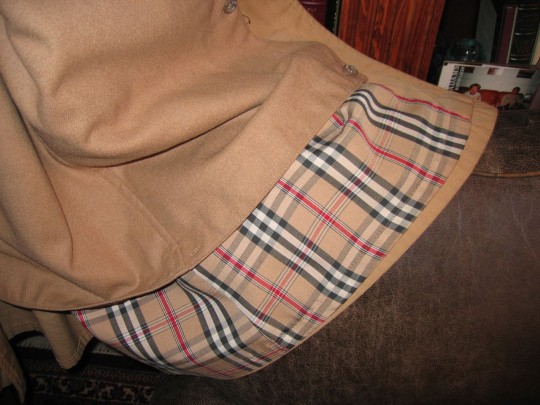 Both coats are a little worse for wear, but they are still warm, functional and vaguely stylish, even if their cuts are out of fashion. Sort of like the men and women of the Armed Forces. Support the troops. Support the mission. They’d rather be warm, dry and at home now too. Thank a veteran.

15 Responses to A Coat for Veteran’s Day