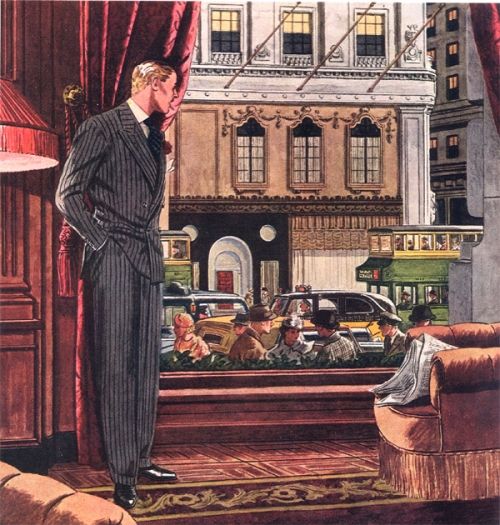 Well, now that we’ve navigated the minefield that is smart casual, I’d like to turn our eyes to the ever elegant suit.

What’s that? You’ve seen some dubious suits lounging about? Hmmm… What is it that makes a suit more elegant than the other that languishes, unworn, in the back of the closet?

Colour? I would say so as it relates to how your clothing interacts with your complexion. 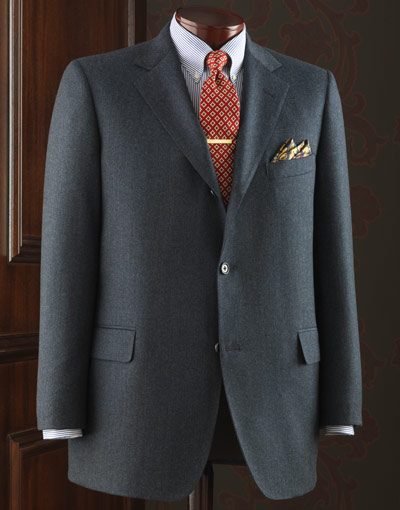 For years the sack suit was the cut of choice; it originated around the time of the American Civil War and gained popularity with college kids during the 30’s as a reaction against the structured clothing of their fathers. By the 1950’s, those kids were the fathers and Brooks Brothers was their store. Featuring a boxy cut, minimal padding, usually undarted, two or three button jacket with a single center vent, the sack was designed to fit every man and became the standby of the suit wearing men of the Cold War era. At least here in the United States. There are those who consider this style to be elegant. I am not one of them, even having worn sack suits cut in the sixties. They are traditional favourites and J. Press (see photo above), I believe, may be the last champion of the style.

Two other countries fight for the right to claim their suits as the most elegant. They are Italy and England. (France had a minor success with the new look by Cardin who designed highly squared off shoulders and trim suits.) As far as I can tell, the difference between Italian and English suits boils down to drape (and in recent years the narrowness of the cut) and padding.*

So what is “drape?” As simply as I can put it, drape is extra fabric at the chest of a suit coat and when referring to the silhouette it also takes into account the fullness of fabric over the shoulder blades that is needed for comfortable movement of the arms (the “bladed back.”) It will cause ripples and that can bother some people. It didn’t bother Fred Astaire (who wore nothing else but a drape cut), Cary Grant, the Duke of Windsor or Prince Charles when Anderson & Sheppard (where Scholte invented the cut in the 1930’s), made their suits. 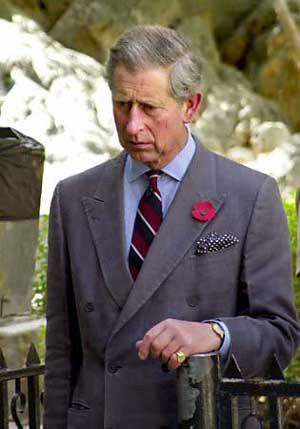 The drape suit, or British Blade, is characterised by a full chest with drape at the sides (small vertical cascades of material that you can identify in many photos) and shoulder blades, sloped and unpadded shoulders that are slightly extended, a shaped waist (darted) and tapered hips. The effect is to make the chest look more muscular, your waist slimmer and your hips narrower. Trousers are generally full, pleated and higher waisted so that they continue the line of the suit. The construction is very soft, meaning that the jacket hangs loosely, giving you a lot of room to move. Because of it’s shape and padding (particularly the full canvas construction, etc. of bespoke) though, it isn’t sloppy looking. The drape cut is shown off best in a double-breasted model like our man’s above. 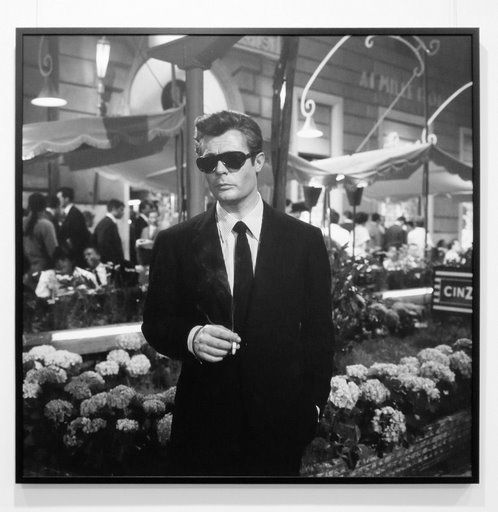 The Italians favour a slimmer look. See Marcello Mastroianni in “La Dolce Vita.” Their classic style is sleeker, cut closer to the body with minimal padding and natural shoulders. The gorge (where collar and lapel meet) will be higher and the waist of the coat a bit higher than the natural waist. (On the English suit, the waist button will be a bit lower than the natural waist. If you’re going bespoke it should really depend on your height, in my opinion.) Trousers (this season) are slim, lower rise, flat fronted and will end just before touching the shoe. The ready-to-wear-Italian-made-for-the-American-market clothes in my closet (Canali, for example) have clean chests — not draped — but a lot more padding than the suits produced for Italians as I understand it. The one Barbera suit I own is surprisingly soft and roomy and is an example of the Italian mimicking the drape cut, only with a natural shoulder.

There’s more to discuss, but this may have you thinking. If you consider elegance to be a sort of sophisticated nonchalance, you may see the English Drape as the more elegant of the two. If you think of elegance as smoother and more precise, your taste may run to the Italian style. Which style do you prefer?

* For every rule there is an exception.

There are other silhouettes/cuts in the British arsenal. Hacking jackets (Huntsman being the standard to which…), and military inspired suits like those produced by Dege & Skinner or Gieves & Hawkes (Hackett borrows somewhat from both as well). But the drape was the revolutionary casual yet sophisticated look that really changed the way men dressed.

Italians, particularly Neopolitans, can also cut a drapey suit and have special touches like the “shirt shoulder” or “spalla camicia” that feature cascading folds of fabric.

For the purposes of discussion, I am generalising. And, I have only ever commissioned fully bespoke clothing for Mrs. E. My thoughts are based on research, an inherited suit or two and a bad made-to-measure habit.

Which brings me to: many thanks to the author of “The Suit”, Nicholas Antongiavanni, née Michael Anton, as he makes things very clear and easy to understand. His book is a wonderful thesis on what makes for an elegant suit.

7 thoughts on “Taking the Measure of Elegance of A Suit”