Posted on October 2, 2009 by TheElegantologist 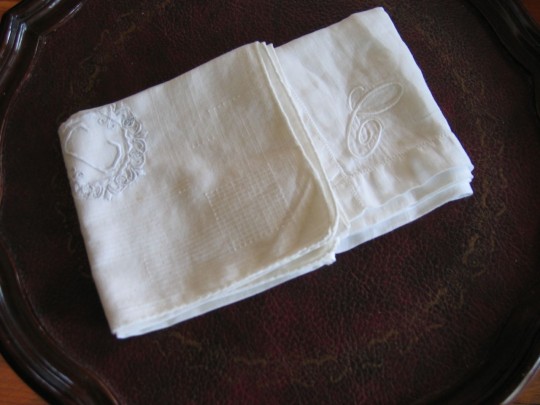 The truly elegant man is never as nerve-wracked in appearance as I frequently appear to be. At least until the first bit of Dutch Courage hits about halfway through a martini.

Given my ability to manufacture stress and my penchant to wear dress clothing almost exclusively, I tend to perspire at inopportune times. And at times like that I mop my brow, wipe my hatband, dab my neck and get on with things. And I do that with a pocket handkerchief. I carry one always. I prefer cotton, but the ancient linens above are lovely and gets tucked into the hip pocket or the suit coat pocket on occasion. Cotton is easier to give away, or not miss if ruined.

They’re very useful, you know, for things other than mopping one’s brow. They dust off park benches for one’s lady friends. They allow parlay with the enemy in order to let him bow out of the fight gracefully. They bind up a wound if that does not happen. Always be gracious in victory. That’s the motto when the Easy and Elegant Life household takes the field.

In “The Last Crusade” a handkerchief doubles as protection from the sun whilst riding into the sunset.

Of course, the pocket handkerchief may become a pocket square and there are those who wear that way and use them as they were meant to be used. And then there is a reporter friend of mine who carries a bandana as a handkerchief. Along with his ancient tweeds, bowties, round tortoiseshell glasses and commemorative military belt buckles, it suits him. Dandily.

Perhaps the handkerchief’s decline in popularity came from the rise of the ” ‘doo rag?” Or the aversion to re-pocketing a used one? Or the triumph of the Kleenex, disposable tissue? I’m not sure. But it would do for you to carry one. As a man of action, you never know when you might need one.

This entry was posted in Elegantology and tagged Handkerchief, Kleenex, The Last Crusade. Bookmark the permalink.