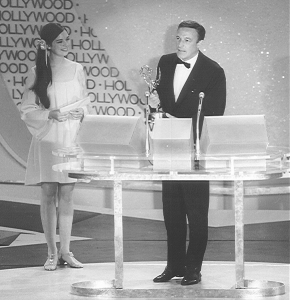 (Mr. Gene Kelly accepts an Emmy for his work on a children’s program during the “swingin’ sixties.”)

The Emmys were interesting this year. Did you notice that an awful lot of the gowns going down the red carpet were inspired by those of the past? And if there were a number of men wearing two button dinner jackets with four-in-hand ties, there were in evidence a few properly clad bow-tied and pocket squared gentleman. Jon Hamm and Rob Lowe got it right.

According to an Easy and Elegant Life reader, who was in attendance as an escort to Ms. Klum, it was hot. Kudos go to those who didn’t let down the side and kept their dinner jackets on at least for the cameras. I hope the swag bags held plenty of Gold Bond travel size bottles.

Julia Louis-Dreyfus looked outstanding in her Grecian column. Drew Barrymore looked every inch a Hollywood legend. Kara DioGuardi’s dress was magnificent. Even Debra Messing’s red 70’s one shouldered gown was fresh looking to me. I could go on.

And that is a good thing.

Could this signal a return to a nicer way of dressing? Or is this just the designers trotting out their latest looks for the camera? Regardless, for one brief shining moment we were treated to a glimpse of what Hollywood is capable of when the grown-ups decide to celebrate their own. I hope it carries over into the cold light of day.

5 thoughts on “For One Brief Shining Moment”