It Takes a Villa: Red Shirted

Posted on August 22, 2009 by TheElegantologist

Easy and Elegant Life’s foreign readers may want to skip this one. I’m an unabashed patriot and Army brat.

Sometimes, it takes a Villa. 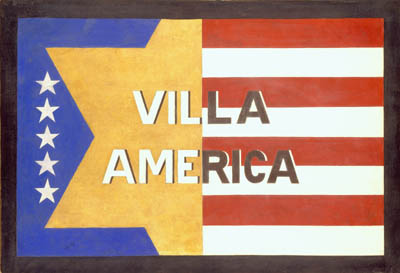 Yes, it’s probably one of those things… an email that came my way that is easy to dismiss as a “crank call.” But it’s a thought. On Independence Day this year, the vast majority of houses in my neighbourhood did not display the flag.

In my book, that’s unforgivable.

My grandmother once pushed me too far on the subject of my President, she said he wasn’t hers. I called her on it. I owned up to him — George W. Bush — as I do President Barack Obama and all who came before and will come after him. For better or worse, the President is my President, our President. If I don’t like his ideas, I’ve got my vote.

You may or may not agree with our foreign policy, our domestic policy, our health care policy, our environmental policy or whatever. I frequently do not. But if you are a citizen you are a part of something larger, something that lets you express how you feel when and where you like it, without fear of reprisal. As an American you are something different, often neither fish nor fowl, “neither pest nor puritan.” And sometimes we need to come together, to forget our petty differences for the good of our fellow Americans. And somewhere there are airmen, soldiers, sailors and Marines who would much rather be debating the issue back home with their families; but they volunteered, for whatever reasons, that’s not the point, and it spares the rest of us mandatory service. Let them know that — regardless of what you think about their missions– you are thinking of them back here, when they’re over there.

If the red shirt thing is new to you, read below how it went for a
man…

Last week, while traveling to Chicago on business, I noticed a
Marine sergeant traveling with a folded flag, but did not put two
and two together.

After we boarded our flight, I turned to the sergeant, who’d been
invited to sit in First Class (across from me), and inquired if he
was heading home.

No, he responded.
Heading out I asked?

No. I’m escorting a soldier home.

Going to pick him up?

No. He is with me right now. He was killed in Iraq, I’m taking him
home to his family.

The realization of what he had been asked to do hit me like a punch
to the gut. It was an honor for him. He told me that, although he
didn’t know the soldier, he had delivered the news of his passing to
the soldier’s [sic] family and felt as if he knew them after many
conversations in so few days.

I turned back to him, extended my hand, and said, Thank you. Thank
you for doing what you do so my family and I can do what we do.

Upon landing in Chicago the pilot stopped short of the gate and made
the following announcement over the intercom.

“Ladies and gentlemen, I would like to note that we have had the
honor of having Sergeant Steeley of the United States Marine Corps
join us on this flight He is escorting a fallen comrade back home
to his family. I ask that you please remain in your seats when we
open the forward door to allow Sergeant Steeley to deplane and
receive his fellow soldier [sic]. We will then turn off the seat belt sign.”

Without a sound, all went as requested. I noticed the sergeant
saluting the casket as it was brought off the plane, and his action
made me realize that I am proud to be an American.

So here’s a public Thank You to our military Men and Women for what
you do so we can live the way we do.

Very soon, you will see a great many people wearing Red every
Friday. The reason? Americans who support our troops used to be
called the “silent majority.” We are no longer silent, and are
voicing our love for God, country and home in record breaking
numbers. We are not organized, boisterous or overbearing.

Many Americans, like you, me and all our friends, simply want to
recognize that the vast majority of America supports our troops. Our
idea of showing solidarity and support for our troops with dignity
and respect starts this Friday — and continues each and every
Friday until the troops all come home, sending a deafening message
that … Every red-blooded American who supports our men and women a far, will wear something red.

By word of mouth, press, TV — let’s make the United States on
every Friday a sea of red much like a homecoming football game in
the bleachers. If every one of us who loves this country will share
this with acquaintances, coworkers, friends, and family, it will
not be long before the USA is covered in RED and it will let our
troops know the once “silent” majority is on their side more than
ever, certainly more than the media lets on…

The first thing a soldier says when asked “What can we do to make
things better for you?” is. “We need your support and your
prayers.” Let’s get the word out and lead with class and dignity, by
example, and wear something red every Friday.

I don’t much care if you wear red. Show some sign; how about a flag pin or a nod to our Stars and stripes like Gerald Murphy’s, above? For that matter, how about tying a yellow ribbon around the flag, if you fly one. Or, how about flying Old Glory period? “Red shirt” in Star Trek lore refers to the character who is sent down into harm’s way and is soon to be killed. In the collegiate sports it means to suspend your participation to preserve your eligibility for another season. Let’s not sit this one out, huh? I can’t.

Thus endeth the screed. We now return you to our regularly scheduled program.

9 Responses to It Takes a Villa: Red Shirted