Posted on August 31, 2009 by TheElegantologist 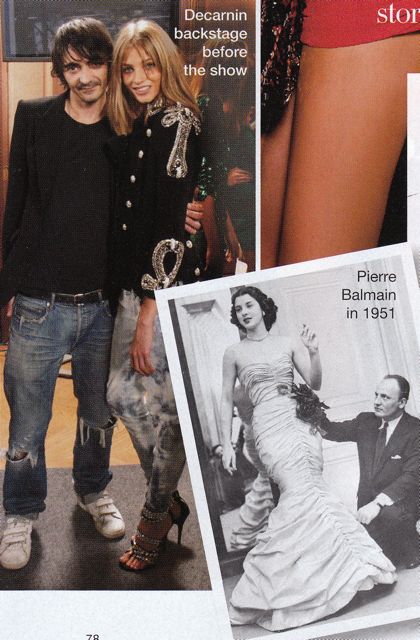 Did it all start here? Or is this just the expected fallout?

Grime, scruffy chins, ripped jeans, ink… where did we go wrong? I used to look forward to the warmer months when sundresses hit the streets of the city and sunkissed skin signaled the arrival of summer. Nowadays, the “dangerous” tan has been replaced with inky tattoos that my or may not be the reason that evening dresses are cut high on the thigh but feature long sleeves.

I’m as red-blooded as the next guy, but is this really what women want to be wearing?

According to NY Magazine it is.
When French couturier Pierre Balmain founded his house in 1945, he, Christian Dior, and Cristobal Balenciaga were the design giants responsible for reenergizing lavish couture dressing after World War II. Balmain’s elegant, super-feminine looks were favorites among European royalty and Hollywood fashion plates like Marlene Dietrich, Katharine Hepburn, Brigitte Bardot, and Sophia Loren. Since Balmain’s death in 1982, the glory days have dwindled … Investors revived Balmain in 2005, and brought on designer Christophe Decarnin, fresh from a decade’s work at Paco Rabanne. And for a label that was once known for ultraelegant evening attire with a draping and pleating focus, Decarnin’s appointment took it toward tough-chic, thigh-grazing, body-skimming looks—a sensibility that embraces the quintessential trendsetting French party-girl. Owner Alain Hivelin claims that sales have doubled since Decarnin’s appointment, projecting 2009 to amass $28 million in revenue (the clothes are notoriously expensive—a sparkly tee is $3,000, dresses are $12,000 to $22,000, and jackets are $5,000)

How could the men in the photo above design anything but what they designed? A well-tailored Balmain made elegant clothes for women who wanted to look … well … elegant. M. Decarnin designs for the woman who wants to be sexy.

Apparently the two adjectives are mutually exclusive. And that’s a shame.

Here are a few more adjectives which we, collectively, should strive to bring back into our lives.

Now, if you’ll excuse me, I’m off to shave and dress. I have a luncheon date with Mrs. E. and my children.

Advertisements
This entry was posted in Elegantology. Bookmark the permalink.