Of Mutton and Lamb

Posted on July 13, 2009 by TheElegantologist 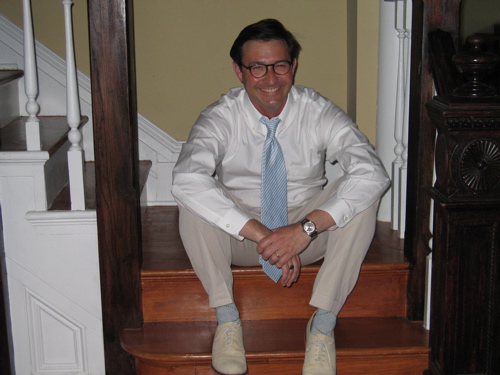 Mrs. E. and I had quite the social whirlwind of a weekend. Last night we attended an open house and then a performance of “Thoroughly Modern Mille” at The Empire Theatre here in Richmond. It was wonderful. Try as we might, we were unable to make the trip out to the far suburbs at 10:45 PM for the remainder of a surprise birthday party for a dear friend. But, the foot-tapping energy of the show had us unwilling to pack it in and call it a night. We stopped on the way home for a nightcap. Our local joint (right around the corner) was closed and so we wound up a couple of blocks further down at a bar called “The Camel.” It is located just under a local public radio station and seemed well-lit.

It was band night. We’re not sure who. Or what they played as they were in the midst of a sound check or a break or something.

The doorman was kind enough to waive the cover as we explained that we had a half hour before we had to rescue the sitter. He stamped our hands and in we went.

The bar is well lit and was full of twenty-somethings in skinny jeans, shorts, flip flops, sneakers, camp shirts, t-shirts, metallic sandals, mini skirts, etc. . Mrs. E. in her white silk, empire waist dress and I (there was a white sportcoat added to the outfit you see above) garnered more than our fair share of stares.

One very nice and well-dressed (sort of a Pucci dress) young woman at the bar asked what we were so dressed up for. “We’ve come from the theatre.” She mentioned how nice we looked and Mrs. E. chatted with her whilst I got our orders across to the barman.

“A glass of Pinot Grigio, a Maker’s Mark and a water back, please?” It has been my experience that when in doubt, no bartender can do wrong to a bourbon, neat. I didn’t think that he was up to a martini, but I could have been mistaken.

The guy in back of me was leaning over the bar to shout to another bartender his order for “two cold ones… ” which turned out to be Pabst Blue Ribbon beer.

A few moments later we were asked by another person. Moments after that, a younger man turned around and seeing me in his path asked “What’s this? Miami Vice?”

“Yes, we’ve decided to make honest children of the kids after all these years….”

A small Elvis Costello impersonator eyed me warily and scooted around my blind side.

We drank up and laughed all the way out the door.

We are, officially, middle aged. Albeit, with bar stamps on the backs of our hands.

(CORRECTION to the Genius Bar rant. Mea culpa. My optical drive was partially burnt out. Brandon diagnosed the issue, got it into he shop, found me a FedEx Kinko’s Office to get some scans done and emailed before a deadline and never lost the smile on his face, even as he assured another customer whose case seemed hopeless that they’d get things taken care of. Verizon tech support, on the other hand took three calls before they told me that the “Time Capsule” isn’t supported by Verizon and so they could really do nothing for me in order for it to be set as the wireless router for the house…. All that and no iPhone — which they had been offered first — makes me question their business acumen.)

6 Responses to Of Mutton and Lamb