Posted on June 5, 2009 by TheElegantologist 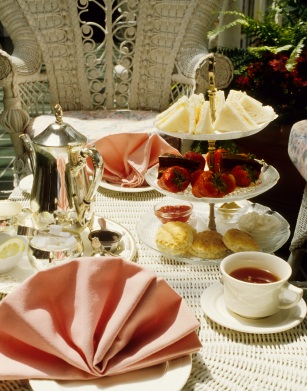 At three o’clock in the afternoon, my energy levels tank. I used to solve the problem by brewing a second pot of coffee. But that made typing difficult, what with the jittering and everything.

Eventually, my two pots of coffee a day habit lessened. Especially after an unforgettable and miserable New Year’s in Bilbao suffering from the ill effects of ten or so espressos consumed over only a couple of hours.

These days, I have two, maybe three cups of coffee a day, spaced throughout the day. On those afternoons which warrant a pick me up, I’m just as likely to steep a cup of tea, sometimes green tea combined with mint, sometimes Earl Grey or Oolong. I rarely go to the trouble of making sandwiches or setting out sweets to eat. No, I don’t really do “afternoon tea.” (For the record “high tea” is a largish meal eaten instead of supper. It is the provence of the “working class kitchen” and is sometimes referred to as “meat tea.” We associated the term with high class. And, as the King sang, well that was just a lie.)

Afternoon tea was invented by Anna, the seventh Duchess of Bedford (1783-1857), one of Queen Victoria’s ladies-in-waiting. In her day, the upper crust ate a huge breakfast, little lunch, and a very late dinner. Every afternoon, the duchess experienced a “sinking feeling,” much like the one I get. One afternoon she instructed her servants to serve tea and little cakes in her boudoir. The experience was so delightful that the Duchess made it a habit every afternoon from that day forward.

Soon others followed the Duchess’ lead, and in just a few decades the custom of “taking tea” in the afternoon had become well established. At first the practice was limited to the upper classes, but it eventually became so popular that tea shops and tea-rooms sprang up left and right.

This would hardly be news to the Arab world, where tea has been the beverage of choice for centuries, or to the Chinese who may have invented tea when it was noticed that a leaf that had accidentally fallen into some boiling water produced a fine aroma and a delightful pick-me-up.

Tea is delightful, both the fresh infusions and the tinned varieties. Whichever becomes your favourite, it is worthwhile to know how to serve tea in the correct manner. Far more elegant than just pouring a mug and surprisingly easy to throw together, our ritual is nothing like the celebrated Japanese tea ceremony (or that of the Duke of Windsor who was said to have instructed a new member of his staff that “tea” would be called for at 4:00 PM. And by “tea” he meant whisky, of course.)

Set the table. Because it lends a sense of occasion to the proceedings and forces you to slow down and enjoy your cup. Bone china, polished silver, starched linens and something green and colourful as a centerpiece would not be remiss.

A tea needn’t be a sit-down affair either. A buffet for a number of guests, laid with some treats and the tea service, is always welcome. Gentlemen should serve the lady in this case; at least in my opinion. If you intend to set the table, lay out a dessert plate, forks and knives instead of the luncheon or dinner service. (By the way, Mr. Worthington once told me that the secret to a great cucumber sandwich is butter. Lots of butter.)

Warm the pot. Yes, tea comes to the table in a pot. Warm it with hot water (which is poured out) or in a very low oven. A tea cosy will keep the pot warmer longer, if you can bring yourself to use one. One teaspoon of loose tea per cup (and “one for the pot”) is then added to the warmed pot. Fill the pot with freshly (almost) boiling water.

Now, here is where things get tricky. Most stipulate that the tea should steep for two to five minutes. The longer it brews, the stronger the beverage. And, the more tannins are released. I like tannic wine. I’m not a huge fan of mouth-puckeringly tannic tea. I choose a strong tea and brew it for less time.

Milk (always called “cream” even though it isn’t) and sugar (“one or two?”) or lemon are added to the cup before the tea is poured. Keep one hand on the lid of the pot so it doesn’t fall off and pour the stream steadily into your strainer and into the cup. {Editor’s Note: Please see Parthnope’s comment below to avoid my faux-pas.}

Take a moment to enjoy your afternoon and have a cuppa. Or call for a whisky. It’s Friday, after all.

This entry was posted in Entertaining, Living and tagged afternoon tea, Anna Duchess of Bedford. Bookmark the permalink.