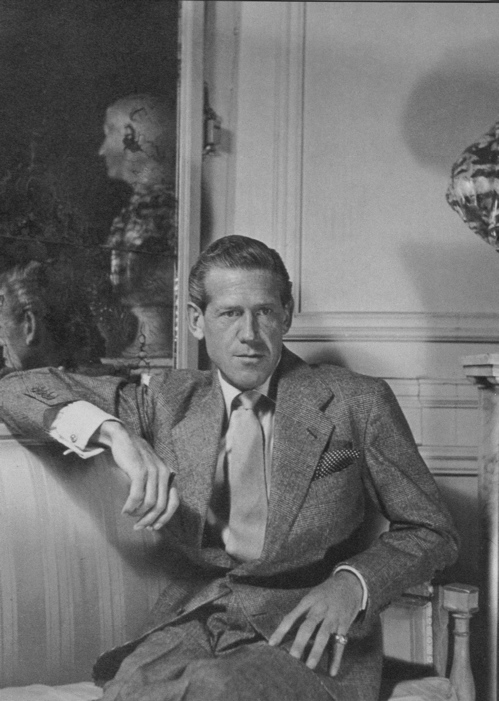 (Van Day Truex from the book by Lewis. I believe he is wearing the same suit in which he is pictured on the cover. An elegant suit and an easy pose will always look chic.)

“Good taste is forever.” It may be the Brunschwig & Fils motto, but it was Truex who came up with it and it applies equally well to the man.

The village baker, who worked in his grandfather’s bake shop when Truex lived in Gordes remembers, “Monsieur Truex was always immaculately dressed, even in the early-morning hours when he walked down the hill for his baguette. He was never without a jacket. Our other customers, at that hour, looked as it they had just gotten out of bed. Monsieur Truex was different.” The baker was not alone in his admiration of his customer’s sartorial elegance. In 1974, Truex would be inducted into the International Hall of Fame as one of the best-dressed men in the world. (p. 216)

I’d read about Van Day Truex before. On the internet, of course. My education in the design world is sadly lacking. I bought the book and it sat, undisturbed, on the bookshelf for more than a year. But then Square With Flair™ mentioned it again and a brief discussion in the comments section last week led me to take the biography down from the shelf and settle in whilst nursing a cold.

There is much to learn here. Van Day Truex had a remarkable gift for design and a highly refined “design judgement.” He also had the gift of elegance. All as a result of a trained and critical eye.

One of his students remembers, “Truex moved like a dancer. He struch a chord of elegance when he entered a room.” (p. 58)

Truex is frequently described as elegant and his creations also earn the distinction. But what made him elegant? The author isn’t as interested in exploring that facet of Mr. Truex’s life, but it does bare some examination, if only because Van Day Truex took pains to present an elegant figure to the world. Like Cary Grant, he was self-invented.

“Control. Distill. Edit.” It was Truex’s philosophy on how to achieve the best in design. It could also have been applied to the man himself. He was, by all accounts, incredibly self-disciplined, extremely opinionated and very, very confident. (He was also fluent in French. I just throw that in.)

He was tall, whippet-thin and an early viewing of “Lady be Good” with Fred Astaire left him with a desire to wear bespoke clothing and move through life with a little more style. Time and practice would bring him that. But it was when he was taken into what would become the Parsons School of Design, under the tutelage of Frank Odom that he came into his own. Mr. Odom taught him of the importance of the classical in design and to cultivate society.

Throughout the book the reader can trace the origins of Truex’s lifestyle influences. He was constantly surrounded, both professionally and personally, with people with “good taste” who understood good design and who exercised good judgement in everything from the company they kept to the furnishings in which they invested. There were the Marshalls, hosts with a regimented, yet relaxed, life in Italy. Elizabeth Chachavadze’s simple meals, beautifully presented. Burnet Pavitt and John Mallet, whose “gentlemanly behavior and perfect decorum shielded them from any criticism.” The Princess de Polignac who introduced him to great music and served him the most elegant tea he had had. To say nothing of the number of wealthy women who contributed to his bank account simply in order that he live that way that his refined sensibilities dictated. Hubert de Givenchy described his taste as “cashmere.” Others found his houses “monastic” and him “austere.”

I had meant for this post to be a distillation of what I thought were the contributing factors to “Mr. Taste” ‘s seemingly innate elegance. Instead, I find that it eludes me, too. I can only speculate that he made up his mind to be more refined in all things, and took from his surroundings those things that fit into his world view.

Indeed, in a transcript of an interview that he granted the Smithsonian Institution, he credited his superior levels of taste to having “grown up in Paris,” and said that “unless one is born with the flair (and then you have the great painter or the great sculptor or the great designer, it is there, you see) for most of us, whatever we achieve toward that quality level, it is to the degree that we are sensitive and intelligent and train ourselves.” (Van Day Truex interview, 1971 Nov. 15, Archives of American Art, Smithsonian Institution. Worth a read; especially since he foresees the end of the era of good taste because of the insistence on profitability first and foremost.)

“Train their eye, instill in them an idea of quality and develop their sense of style.” That was the mandate at Parsons and may do much to explain Truex’s elegance.