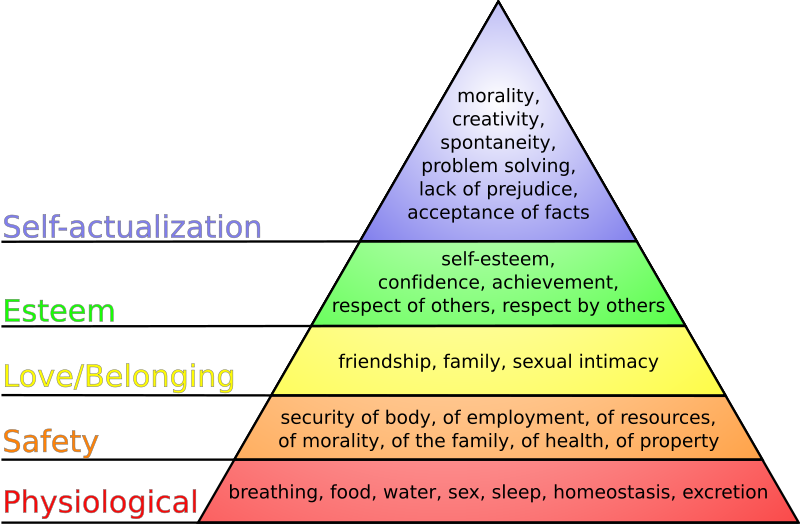 Reading the chart above, I bet we can all safely put ourselves into the topmost section of the triangle. Writing this blog, among other things, certainly qualifies as self-actualizing on my part.

The funny thing is that the pyramid may seem to be built on shifting sands these days. With the economy stumbling along, there are a lot of folks who aren’t feeling that safe in terms of resources and employment. And while the days of the legions of unemployed in decaying suits asking if you can spare a dime may be behind us, brother, they are at the front of our thoughts almost every day.

Mrs. E. and I honeymooned aboard a Windjammer cruise (the vessel and its crew are no longer with us, a tremendous loss.) Sometime around mid-week, we took a hike through a rainforest in the BVI’s. The hike was a bit grueling, to tell you the truth, but the waterfall was spectacular, maybe even worth the wrenched knee that continues to plague Mrs. E. to this day.

At noon, having climbed from the dense and humid thickets, we broke for lunch. A quick head count revealed that while all our fellow passengers had made it, only half of the boxed lunches had.

The lunch boxes were bursting with those overstuffed sandwiches on homemade whole grain breads. Piled high with sprouts, meats, avocados, onions, tomatoes, exotic cheeses, you could barely get your teeth around the things. The desserts were glistening with chocolate and meringues. A drink, bag of chips and a pickle rounded out our provisions.

Mrs. E. and I glanced around and immediately suggested that we share our lunches. A quarter of a sandwich was going to be more than enough. There was more than enough to go around and we were just going to catch the jitney back to the tenders and the boat. We had at most an hour to lay around and digest while drinking in the scenery.

Another couple didn’t blink and immediately doled out half of their lunches to the others. Both men turned out to be from Richmond! Leave it to Southerners. We just love to host. Two Canadian couples joined in, with all the good humour for which they are known… I bought them all a round of cold beer back on board The Fantome.

You thought “Lord of the Flies” was an exaggeration?

I can’t imagine going hungry. I’d gladly give up my rations for my kids, that goes without saying. So, too for my family and then my friends. Especially when I know that the situation is temporary.

Today, Pigtown Design and I are asking that you share a little with those who have taken one on the chin during this economic downturn. Think of it as adding a little water and packing down the shifting sands of the “Safety” section of the pyramid above.

The trouble is, the food banks are seeing more people than ever asking for help and corporate and individual donations are at an all time low. There just isn’t enough food to go around. Turning my back wouldn’t be a very elegant gesture. I will donate today and I hope that you will, too.

I’m not asking for your last dime. Just the price of a cup of coffee. Or less, depending on where you get your coffee… . It may seem like a drop in the bucket. It is not.

One dollar (USD) buys ten pounds of food or provides seven meals for those who are reduced to asking for help from the nation’s foodbanks. USD$25 provides SEVENTY-FIVE meals. You can also help out our neighbors to the North, a little bit of thanks on behalf of the Canadians who joined ranks and helped feed a bunch of hot, sweaty tourists one day in the BVI’s.

We’re calling today April Food Day. Please click the banner below and click again on the site to donate. Leave a comment when you do. Even anonymously.Thank you for reading and for your help. And, if you’ve already donated, I can’t thank you enough. You have done a very noble thing. Together, we will weather the storm.

20 thoughts on “April Food Day: Considering What We Have”