Posted on February 9, 2009 by TheElegantologist 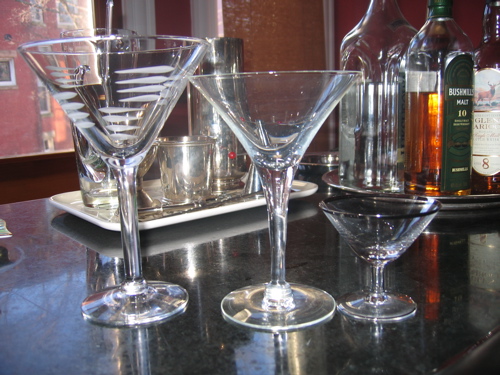 At one point, Americans managed to rule the industrial world and we apparently did it over martinis at lunch and water glasses full of bourbon moments after entering a house.

Did you ever wonder how anyone could possibly have survived a three martini lunch and gone on to a constructive afternoon parlaying with the EVP on the QT, ASAP? In light of my New Year’s resolution (“two martinis, no more”) I wasn’t about to test out my productivity after swimming at lunch. But I did think to do a little scientific comparison.

The photo above shows the cocktail glasses that I keep here at the manse.

The silver lipped one was from my father’s dinner service. It is Rosenthal and was purchased in the 1950’s when he was stationed at the Army Garrison in Garmisch, Germany. A glass this size probably accounts for the old joke that the olive takes up too much room in the glass and so should be dispensed with. It holds 2 ounces, about what you’d expect the cocktail glass to hold that William Powell samples at the beginning of the first “Thin Man” movie.

Were you counting? Six martinis…. at about two ounces each. Twelve ounces. Or just about two of the second glass pictured.

The mid-sized glass is one from my father’s bachelor party on Governor’s Island, NY. That would have been at the beginning of the 1960’s and it holds 6 ounces. These are the glasses that I use most often as I am worried that I will break the older ones whilst washing them.

The largest of the glasses is from a cocktail reception given for Mrs. E. and me on the occasion of our engagement, 1997. It holds eight ounces. One of these is the equivalent of four of the pre-1960’s cocktails. Three of them is almost equivalent to drinking an entire fifth of booze.

I’ve always found the making and consumption of cocktails to be an exercise in elegance. Gerald Murphy was said to look like a priest holding mass when he mixed up “the juice of a few flowers.”

The key word in his oft-quoted remark is “few.” As with anything, moderation is the key to maintaining elegance. If you can find the smaller glasses, buy them. Yes, you will get looks the first time you serve a drink in them, but eventually, your wisdom will win out.

This entry was posted in Entertaining and tagged Gerald Murphy, martini, The Thin Man, William Powell. Bookmark the permalink.