Posted on February 19, 2009 by TheElegantologist 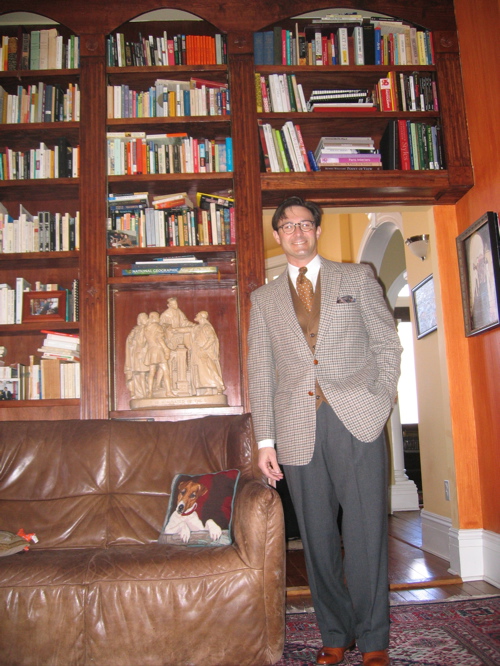 Towards the end of my run today, I ran into a friend (and his dog) who inspired my clothing choices for the day.

You see, it seems warm with the projected high to be in the mid 50’s Fahrenheit, but it’s rather blustery. Somehow I had a headwind both going out and coming back.

My friend, Greg, is a dapper man, as befits an organist and choral conductor. Today he had on his favourite sportcoat, which is a dark tan with a very lofty hand and overlaid with red, green and blue plaid and heay enough to be worn without a topcoat on these in-between days. He had a scarf tucked into the collar, which was not wrapped around his neck, but tucked under the closed front quarters of his buttoned coat.

“It’s a good day for an odd vest,” I thought to myself, since the scarf reminded me of one. As envious as I am of Greg’s sportcoat, I don’t have anything like it. But, with the solid vest, a solid shirt, conservative tie and grey flannels, I figured I could get away with an outrageously checked Harris Tweed number.

You may realize that the camel hair vest is cut on the long side. That is an unfortunate result of the modern tendency to wear a belt instead of braces. The vest must be long enough to cover the belt and shirt when your trousers slip under your belly and down to your hipbones when wearing a belt. I do think that it throws the balance off, but I’m living with it as my MTM budget has dried up for a bit. I’m shopping my closet. Another reason why I’m winding up with so many casual combinations. A lot of this stuff is from high school and college. Or to put it another way, the 1980’s.

It’s all too country, I realize. But I don’t actually work in an office in the city. It used to be that you could get away with tweeds on Mondays or Fridays. The thought being that you were either returning from, or going to your country place. This being Thursday, I don’t have that excuse. With the recent spate of bowtie wearing and today’s country casual, I suppose you could argue that I am feeling decidedly frivolous. You may be right. But the vest allows me to keep the heat in the house down, whilst not letting down the side. Some city houses can be as draughty as country estates.

6 Responses to An Odd Vest