Posted on January 16, 2009 by TheElegantologist 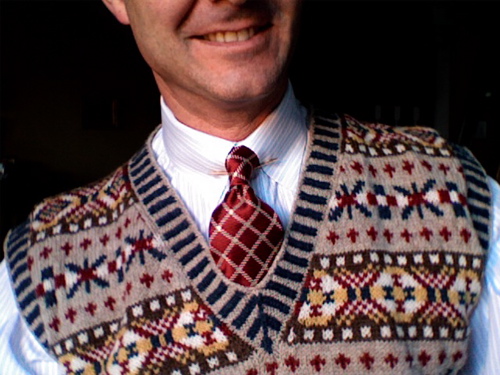 That old Duke of Windsor just had some kind of influence on men’s fashions, didn’t he? He springs to mind today as it is incredibly cold (for Virginia — Call Me Al, hope you enjoyed sunrise over the swamp and at least saw a few flying today….) with temperatures expected to top out around 27ºF.

In the days before central heating, say 1921, this kind of weather would send you scurrying for the sweater drawer to add another layer to your suit. And if you were Edward VIII, Captains of the Royal and Ancient Golf Club at St. Andrews, you might reach for a classic Fair Isle sweater to keep you warm on a very cold course.

When Edward wore his for his portrait, the Fair Islanders had been knitting sweaters for only 50 years or so. (Hats, scarves and gloves were the norm of the previous hundreds of years.) The sweaters became such a hit among those who sought to emulate the stylish dress of Edward, that they quickly became an unofficial part of the school uniform among the Oxbridge crowd.

The sweater continues to be hand knit in Fair Isle, which is a remote island off the northern coast of Scotland, between Shetland Isle and The Orkneys. They are colourful numbers, as you can see in the picture above and I can attest to their extreme warmth. The colourful horizontal bands of pattern are sure to enliven even the greyest winter’s day.

An authentic Fair Isle sweater cannot be purchased outside the UK. Fortunately, we have the internet. Mrs. E. and I got ours here, and these folks pop up on the internet search, too. The first I ordered turned out to be too big to wear under a tweed jacket, so I ordered a smaller size — after much convincing of the very kind proprietess — and got it just about right. With the temperature now standing at 17ºF, I only wish that I had had the Prince of Wales’ foresight and ordered the long sleeve version, too.

Since each sweater requires about a hundred hours of handwork, it might take a while to get yours. It will be worth the wait. And like all articles of clothing that I recommend, it will never really go out of style. Out of fashion, certainly, but not out of style. That makes it an easy and elegant addition to your winter wardrobe.