Posted on October 2, 2008 by TheElegantologist 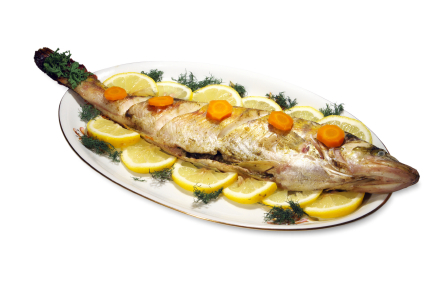 The other night, Mrs. E. and I were privileged to have dinner with new friends. We chose a restaurant that was close to the theatre where they had played that night. I ordered a whole Branzino, or European Seabass. It quickly became evident to me that I had miles to go before I developed the skills necessary to deal elegantly with eating a whole fish at table. My father had them, and it is his facility with the cutlery that I seek to obtain.

So, for those of us who are willing to look dinner in the eye and do the dish justice, I present “The Easy and Elegant Life Guide to Filleting a Fish at Table.”

Using your knife and fork, remove the head and tail. I would hope that a plate has been provided to receive the discarded bits. If, as was the case that night, it has not and the dinner plate isn’t of sufficient size to accommodate the bones, it may be acceptable to use your bread plate. I hope so; that’s what I did, but I suspect that it is not acceptable at the best tables. So, best remove the head and tail to the side of your plate.

Next insert your knife next to the backbone run it along the backbone from the head end to the tail end. Lift off the fillet and remove the backbone to the scrap pile.

You may now eat the fillets.

If you find small bones in your mouth, push them to the front of your lips with your tongue and deposit them onto your fork to be placed with the other remains. I was considerably more crass than this, but will never be again.

If the fillets are flakey enough, you may wish to use only your fork to eat them. Hold it in your right hand, tines up or down as you are most comfortable. When using your knife and fork, fork in the left, tines down, knife in the right acting as the cutter and pusher.

My father used to use his fork and a spoon to fillet the fish (which invariably was served on a platter) and lift the fillets to his plate. This strikes me as infinitely more elegant. But it requires the server to stand there for a moment and so is unlikely to occur in today’s restaurants and certainly not at home, unless you are in sufficient funds to employ help.

Finally, a word about the much-maligned fish fork. The prejudice against them came about with the emergence of the middle classes in Britain. Long ago generations had not eaten à la Russe (in courses as we do now; Louis XIV established the practice) and had relied on a more basic combination of the knife, fork and spoon as the only utensils. (Spoons were associated with infancy and so were avoided unless absolutely necessary. There was the individual salt spoon, the demi-tasse and the serving spoon with the soup spoon making its appearance at table after WWII.) The fish fork, therefore, would not have been a part of the inherited cutlery and was associated with the new money of the middle classes. A large table fork would have been used as the fish fork.

Interestingly, at today’s table we have done away with much of the Victorians’ elaborate dining rituals and with them have gone the extended sets of flatware. We are back to setting the table with the basics, more or less, of the Great Houses in England.

5 Responses to The Fish Course