Posted on September 9, 2008 by TheElegantologist 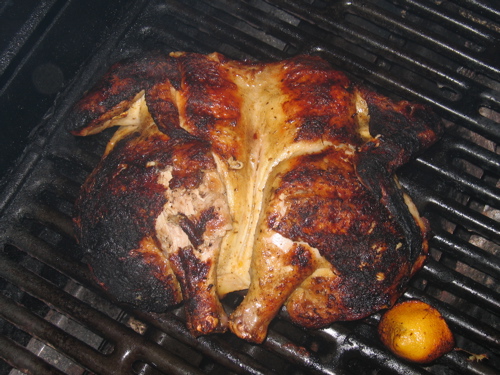 Back in the 80’s, Mrs. E. was a Cutco knife salesperson. She did very well at it and determined then and there that she would never go into sales. Which is why she is a pushover for former students of hers who come a-knocking with the wonder cutlery that is never beautiful, but works beautifully.

We were the proud recipients, in recent days, of the best pair of kitchen shears that I’ve used. Not only do they separate for cleaning and sharpening, they look murderous.

Until last night, they remained untested by anything more strenuous than pizza or herbs.

So I bought a whole chicken with the intention of butterflying, marinating, and grilling it. This was the absolute first time that I tried to butterfly anything and I was prepared for a fight. Sleeves rolled up, poulet rinsed and patted dry, the Cutco shears and I made the first tentative snip along the backbone. I split the bird asunder with frightening ease and continued along the other side of the backbone, removing it in short order. Cutting through the cartilage was even easier. The butterfly within had been freed.

I counted all ten of my fingers.

What could be easier or more elegant than avoiding the Julia Child-like hacking away that was the order of the day before industrial strength kitchen shears were made available to the amateur?

Place the floppy result in a gallon sized ziplock bag with 6 tablespoons of commercially produced Hungarian Pride of Szeged chicken rub (or mix: minced garlic, paprika, basil, oregano, salt, pepper and onion together. A fair approximation, but lacking that MSG zip.) Add a good, long four count pour of olive oil and the juice of one lemon to the bag. Zip it shut and shake it around to coat the chicken. Refrigerate for 4 to 6 hours (or two as I did….), heat the grill to low-medium and cook over indirect heat (or don’t. It didn’t seem to hurt the bird when the fire flared up a bit) for about an hour, flipping once. If it’s a bit underdone, cut it in half and microwave each half for three minutes on high.

You may also broil the chicken for about ten minutes a side until a thermometer inserted in the thigh reads “180ºF.”

Serve with a salad dressed with a garlicky vinaigrette and crusty bread. We uncorked a very nice 2007 Côtes-du-Rhône Samorëns blanc from Ferraton Père & Fils to drink alongside, but a Sauvignon Blanc would also work well.

As a final word of warning: I had to skip breakfast and run an extra couple of miles today since I dispatched half the chicken, myself. Mrs. E. was kind enough to leave me a leg and thigh for my lunch today. Unfortunately, the wine’s gone, too.

This entry was posted in Entertaining and tagged chicken, cooking techniques., grilling, recipes. Bookmark the permalink.