Posted on July 28, 2008 by TheElegantologist 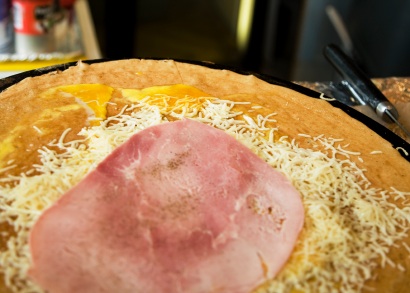 During the year that I spent with my grandparents on the Eastern Shore of Maryland, I was introduced to the hunter’s breakfast. My grandfather and I, wrapped in our longjohns (thermally insulated long underwear) would sit at the breakfast table in the kitchen and fortify ourselves with a pre-dawn slice of pie. He would have a cup of strong coffee with sugar and a little milk. Mine was more than half milk. The rest of the pot (prepared by my grandmother who would make it and go back to sleep) went into a thermos. We were ready to go by 5:00 am. Breakfast would wait until our return from the duck blind. It is one of my favourite ways to start a day.

The well-rounded Mrs. E. also has a favourite breakfast, a specialty of Rennes, where she finished high school: les galettes de sassarin. My introduction to the savory crêpes came during our honeymoon. After having heard about them for years, I found myself sitting in a small restaurant at the water’s edge on Isle les Saintes, in the B.V.I. A Breton couple retired to the island and decided that they just couldn’t live correctly without galettes. I could see why.

The buckwheat pancakes aren’t just for breakfast. They make for excellent luncheons, too. Particularly when filled with sautéed mushrooms, gruyère cheese and ham, and accompanied by a bottle of cidre brut (yes, dry hard cider.) Traditionally, the galettes were made before lent to use up all the good stuff that you were going to give up for the next 40 days. Sweet filled, they are the more familiar crêpes. But the savory ones are the ones that win my heart. (If you do like a bit of something sweet, one of the most delicious preparations is to douse the crêpes with lemon juice and sprinkle with fine sugar — a very easy and elegant dessert.)

The good news is that with today’s new emphasis on things organic, finding organic buckwheat flour was as simple as heading for my local supermarket. So this morning I treated Mrs. E. to a bit of Brittany with une galette de sarrasin completes.

Put the sea salt and flour into a medium mixing bowl. Make a well in the middle and pour in your beaten egg and water, mixing them into the flour. Your batter should be runny and a little “ropey” when you lift your whisk.

Preheat your large skillet over high heat and brush it with a little clarified butter, and/or spray with the butter spray.

Pour enough batter to thinly coat the bottom of the skillet (a 1/3 of a cup?) and quickly rotate and tilt the skillet to coat the bottom with the batter. It may have holes in the middle. Fine. When the edges go crispy, flip the galette over and finish the other side. That will take very little time. The middle may be a bit spongy and the edges crisp. Perfect.

Remove to a platter and keep warm under a towel or in a very low heat oven.

Fry the egg in butter (sunny-side up or scrambled as you like), salt and pepper. The ham can also go into the pan to heat up. Shred some cheese onto a galette, top with the hot ham and your egg. Fold the sides over the top and serve. (I melted the cheese a bit in a microwave for about 20 seconds.)

This being a regular morning, we skipped the cidre brut in favour of a cup of coffee and bit of orange juice. Don’t feel you have to.

This entry was posted in Entertaining and tagged recipes. Bookmark the permalink.

5 Responses to A Farmer’s Breakfast