(with apologies to the Fab Four.) 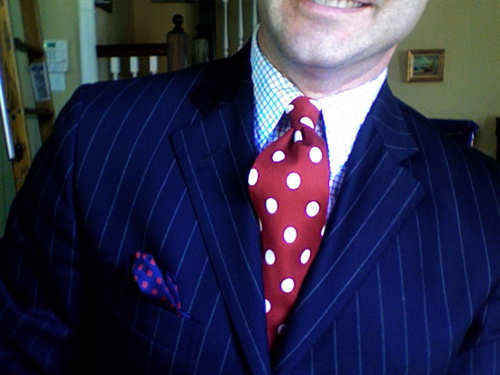 I had the privilege of attending a friend’s one man show last week. It was entitled “Stages: the Defining Phases of One Man’s Life.” Mr. Hester was incredible. He took us on his personal journey with humour, grace and song. I couldn’t have done it. It was tightly edited, performed and paced. Especially for a “vanity project.” “American Idol” fan? Head for your local theatre instead and support the people who can’t give up their day jobs, but will turn themselves inside out on stage for your viewing pleasure. If you are very lucky, you may catch Chris Hester’s next performance.

I took something else away from that evening. Watching Mr. Hester’s “costume changes” I was struck by how effective a single article of clothing can be in conveying a message (and the pleasures and dangers that can come with that territory.) With the backwards baseball cap placed squarely on his head, Mr. Hester immediately let us know that he was about to relate a few college experiences to us.

Our tastes have evolved over the years – at least I know that mine have. But, packrat that I can be, I have numerous ties, jackets and shirts that still can be relevant to my wardrobe, if used in different ways. Much the way that Mr. Hester’s hat saw double duty in “Stages.”

Take the conversation piece of a tie (above) that I wore to the performance. It is a Brooks Brothers tie ca. 1990’ish. I used to wear it only with charcoal grey suits and white shirts, trying to channel John Malkovich’s opening scene in “Object of Beauty.” Now it stands out (hopefully in a not-too-clownish fashion) as a fun part of a whimsical whole (at least that’s what I hoped for.) A “yes I’m ‘dressed up’ but I’m still willing to have fun” sort of thing. I think that for a casual Friday, evening at a live performance or cocktail party it would be a good look.

“You’re in a suit and tie,” you’re thinking. “What is so casual about that?”

Let’s deconstruct for a moment, the evening’s look.

Blue socks with a miniature red and tan pattern. (Unseen)

Dark brown suede shoes (Unseen and yes, I broke my own rule against black after five.)

That’s six patterns worn together in a more-or-less harmonious whole thanks to varying scales of the designs.

But it was the tie that got the most comments. Why? Because the large spots are inherently un-business like.

The lesson? Regardless of prevailing trends, the larger the pattern on your tie, the less formal it is. A repeating pattern of small pink Easter bunnies and multi-coloured eggs on a Hermès tie is whimsical but sober enough to be seen on a banker. One large, hand-painted hula girl screams “1950’s Shriner in the convention’s punch bowl.”

So, evolve your everyday look by repurposing pieces that haven’t seen the outside of the closet for awhile. But, be very mindful of the message that you’re sending. Some days it’s important to project thoughtful, sincere, confident. On others… feel free to send in the clowns, and show them that you don’t take everything as seriously as they think.

3 thoughts on “You Say You Want an Evolution…”