Cell Etiquette: Yes, but are you listening?

Posted on November 5, 2007 by TheElegantologist 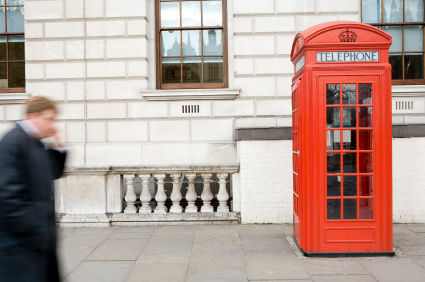 “If anything characterizes the 21st century, it’s our inability to restrain ourselves for the benefit of other people. The cellphone talker thinks his rights go above that of people around him, and the jammer thinks his are the more important rights.”
JAMES KATZ, director of the Center for Mobile Communication Studies at Rutgers University.

…Gary, a therapist in Ohio who also declined to give his last name, citing the illegality of the devices, says jamming is necessary to do his job effectively. He runs group therapy sessions for sufferers of eating disorders. In one session, a woman’s confession was rudely interrupted.

“She was talking about sexual abuse,” Gary said. “Someone’s cellphone went off and they carried on a conversation.”

Not so long ago, the phone booth was the way that people shielded their calls from curious ears. In hotel lobbies, phone cabinets (with doors and seats) prevented your secrets from being publicly broadcasted.

“Would you excuse me?” someone would say. “I’m afraid I have to take this call.” And the visitor would be ushered into the outer office while the executive covered the spread with his bookie or arranged a date with his cookie.

I can’t think of the last time I saw a phone booth. Somehow they became unsavory and dangerous-seeming. Cell phones have virtually eliminated the need for public phones. (But, woe to he who is out of tower range.)

So where does that leave us? Shouting into the cell or wandering around with the bluetooth headset affixed to an ear seemingly talking to ourselves (and anybody else within hearing distance.)

If I take a call when I’m in a shop or restaurant, I step outside. At a friend’s house, I’ll step into another room — after excusing myself. And if possible, I don’t take the call at all, silencing the vibrating as quickly as possible. I’ll return the call later, in private.

Can you hear me now? Yes, but are you listening? Enjoy the world around you, drive safely, engage your dinner companion in conversation, don’t interrupt the sleep of the guy next to you who paid good money for the flight, the same as you did. Unless it’s unavoidable, please put away the phone.

This entry was posted in Living and tagged etiquette, Living. Bookmark the permalink.

1 Response to Cell Etiquette: Yes, but are you listening?