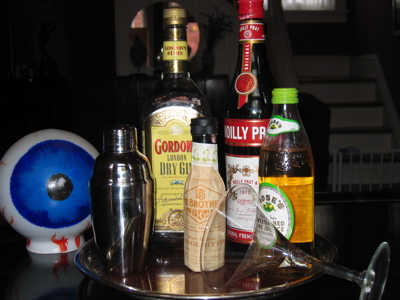 James Bond named his cocktail The Vesper after his love interest in “Casino Royale.” Actually it was invented by Ian Fleming and his great friend Ivar Bryce. The Martini may be named for a bartender called Martinez. Dom Perignon is, of course, named for the monk who discovered it (“I’m drinking stars…” he is said to have exclaimed.) There is a long history of naming drinks in honor of someone.

The most educated Mrs. E. was lucky enough to make a good friend during her college days. I got a chance to meet him when Mrs. E. and I first became acquainted and took to him instantly. Hamilton is a Southern Gentleman, born in Georgia, raised in the Carolinas and schooled in Virginia. And if you’ve ever met a real Southern Gentleman, you’ll recognize his type. He is a charming houseguest and evenings with him are always a pleasure. Hamilton really should be a professional photographer or photojournalist. He has that kind of adventurous spirit, a “ready and willingness,” that it takes to travel extensively and in some cases, immediately — as he did when he drove a couple of hours just to have dinner with us.

“You’re the chef,” he answered in response to my offer of a drink, “something with gin.”

Making a cocktail is easy with a bit of practice. Coming up with something new that is actually palatable is a little more touch and go. Hamilton’s adventurous spirit kicked in quickly — he tried it before I did. It is a combination of a Gimlet and a Gin & It. Call it “Gin & a Bit” if you like. I call it:

The Hamilton Cocktail
Serves One

Pour all ingredients over ice in a shaker. Shake until the metal is frosty. Pour into a cocktail glass (a Martini glass.) Garnish with a lemon twist or flamed orange peel. (To flame the orange peel, cut a twist, light a match and squeeze the peel over the flame and into the drink. The oils should briefly ignite giving a really nice smokey start to the drink.)

Plan your next road trip.

4 thoughts on “A Drink With Your Name On It”