Posted on October 12, 2007 by TheElegantologist 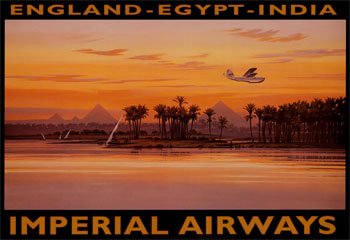 (Poster available from Art.com)
Have you ever had the pleasure of meeting someone who is “larger than life?” I am fortunate to have met two. Both of them while I was at school. One I have lost track of, although it was rumoured that he authored a song for a new wave band in the 80’s and went on to become a published author. The other, I’m happy to report, walked through the door of a local restaurant last night while we were celebrating the impending marriage of a mutual friend. While that may not sound that unusual, it always is somewhat out of the ordinary to run into him… you see, he owns one of two Irish pubs in St. Petersburg, Russia. Thomas, lives large. In fact, I don’t think he’s quit traveling since he graduated. And wherever he lands, his friends gravitate to visit him and soak up a little of his world. As I was reminded last night, they are a well-traveled group and great company.

Travel, as the old saying goes, is broadening. If you’re in school, consider a semester or year abroad. The mulitcultured Mrs. E. finished high school in France and credits that country with her becoming aesthetically aware of lots of things — the little black dress, Chanel perfume, the architecture and the beauty of the language. When I met her, she had never read a living author, nor had she read a French or Spanish author in translation. Want to know one of the secrets to a happy marriage? Sheer intelligence. I can listen, fascinated, to her for hours at a time.

If you are beyond school age, make it a point to spend some time somewhere you haven’t been. Headed for the beach again this summer? How about one in Croatia? Or Spain? Or…. well, you get the idea. If you luck into decent airfare, one week abroad isn’t too much more than two weeks in one of the McMansions springing up at beaches in North Carolina. Especially if you can live on a baguette, some cheese and cheap wine during the evenings (lunches can be cheaper than dinners out and are usually how we indulge ourselves when traveling.)

It used to be a tradition among certain types, English University graduates primarily, to take The Grand Tour around the world, stopping off to visit Pyramids and the Sphinx, see ancient Constantinople and follow in Casanova’s footsteps through the waterways (and bedrooms) of Venice. Though they traveled, they didn’t travel light and sent back crates of antiquities and reproductions of artworks from across Europe. In short, they were developing their eyes for art and beauty, practicing their command of the language, and learning that no matter how different we think we are, there isn’t anything new under the sun.

Travel whenever you can, even if it’s just to the capital of your country, take in the museums, walk the streets, see a show. And don’t forget to send back at least a postcard.