If I Could See It On the Silver Screen

Posted on September 7, 2007 by TheElegantologist 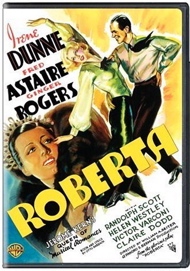 Hmmm, last night the old-fashioned Mrs. E and I sat down to view “Roberta” (Fred Astaire, Ginger Rogers, Randolph Scott, Irene Dunne…) As usual the clothing was… well, “swellegant.” Sure it’s a light and breezy 90 minutes or so, but that’s OK with us. Our taste for heavy drama and most foreign fare came and went during the sturm und drang of our early adulthood. At any rate, it got me thinking about elegance in general. (Which probably isn’t a surprise to those of you who stop by my blog.) So often my icons of elegance are of another era — specifically the time “between the wars.” Astaire, Grant, Powell, Loy, Russell, Loren, Kelly and the whole pantheon of elegance. I favor Art Deco in furnishings (the intellectual Mrs. E also swoons over Art Nouveau.) I’m not sure that I’ve loved automobile design since about 1965. If ever I win the lottery, you’ll recognize me immediately — I’ll be the John Steed like character pottering around town in an XK120, or Bentley 6 1/2 Liter, or something with a strap over the bonnet, hat firmly in place, tie neatly dimpled. “That’s the ticket” as he would say.

But what of today — at the dawn of this 21st century? Where are the icons of elegance and style? Who, in that movie that runs in our heads, would we seek to emulate? I can’t think of anyone. Even Mr. Clooney is hit and miss off-camera. And the Prius, for all its wonderfulness, looks like a stretched AMC Pacer to me.

I can’t claim that the world has become far too casual. In reading “The Man Who Was Clever” by Leslie Charteris, Simon Templar is the perfect 1930s jazz baby playboy or clubman. He speaks in slang that few can understand, and is considerably a “cool customer.” But he is also a beautiful dresser (with money comes privilege.) He wears a dinner jacket (informal attire then) “as if he had been an ambassador paying a state visit in full regalia.” And Fred Astaire wore his tails like pyjamas. Not such a far step to jeans and a blazer, really. Or is it?

So weigh in, clever and astute readers of mine. Let’s start the list of those things elegant, be they Bright Young Things or beautifully built things, or elegantly put things.

To quote the Eagles: “I know my life would be alright if I could see it on the silver screen.”